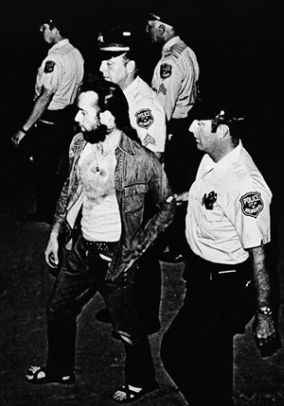 George Carlin, a native of Morningside Heights, died of heart failure yesterday in California. He was 71. The iconoclastic comedian was famously arrested (pictured) after doing his “Seven Words You Can Never Say on Television” routine during a 1972 performance in Milwaukee (you can see video of a 1978 performance after the jump). When the words were later aired on WBAI, the ensuing lawsuit went all the way to the Supreme Court, who ruled in 1978 that the government could sanction broadcasters for offensive language. The counterculture comedian told the AP earlier this year: “So my name is a footnote in American legal history, which I'm perversely kind of proud of.”

Carlin’s career, which spanned almost six decades, included 23 comedy albums, 14 HBO specials, three books, four Grammy Awards and, in later years, voice-over work on Thomas the Tank Engine and the Pixar movie Cars. He also hosted Saturday Night Live’s debut episode in 1975. The tireless comic was working up until his death, having performed at The Orleans in Las Vegas just last weekend. But he had a history of heart trouble, and the Times was ready with a long obituary.

It was announced last week that Carlin would be awarded the 11th annual Mark Twain Prize for American Humor. Scheduled for November 10 in Washington, the show will be broadcast on PBS.

#comedian
#dead
#dies
#george carlin
#obituary
Do you know the scoop? Comment below or Send us a Tip