As it's trying to deal with an alleged hate crime incident outside a dorm, Columbia University has also been quietly trying to change a scholarship's requirements because they are racist.

The Lydia C. Roberts scholarship set aside some graduate school funds for anyone who was born in Iowa who went to college or university in Iowa... as long as they were "of the Caucasian race." Really: 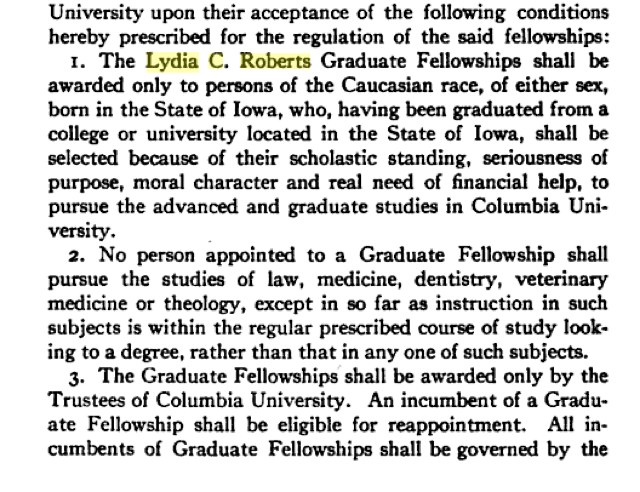 According to the Daily News, Columbia's associate provosot Lucy Drotning "filed an affidavit in Manhattan Supreme Court last week to support a prior action made by the fund's administrator, JPMorgan Chase Bank, claiming the racist provisions set in 1920 are grossly outdated. 'Circumstances have so changed from the time when the Trust was established' that complying with the restrictions are 'impossible,' the filing says. 'Columbia University is now prohibited by law and University policy from discriminating on the basis of race.'"

The Roberts scholarship was established in 1920 by Lydia Chamberlain, who lived in the Hotel Woodward at Broadway and 55th Street at the time, and the News notes, "When the trust was established, it paid a full year's tuition - $691. But the school hasn't awarded the fellowships since 1997, when it paid out $22,000, less than half the year's tuition."

The scholarship is currently listed on a list of endowed fellowships, but it only says, "Open to persons born in Iowa who have been graduated from an Iowa college or university. In addition to the stipend, the fellow is reimbursed the cost of traveling once from Iowa to New York City and back. Special provisions: holders may not concentrate their studies in law, medicine, dentistry, veterinary medicine, or theology, and each holder must, when accepting the award, state that it is his or her purpose to return to Iowa for at least two years after completing studies at Columbia; holders are eligible for reappointment."

Guess we know who is rolling over in her grave at our reality of a black President who graduated from Columbia!

#caucasian
#columbia university
#Iowa
#racist
#scholarship
#stupid
#whites only
Do you know the scoop? Comment below or Send us a Tip
A new Gothamist is coming! We’ve moved comments over to our beta site. Click here to join the conversation and get a preview of our new website.