Seven Columbia University students have been threatened with suspension five days into a sit-in outside President Lee Bollinger's office to demand that the University divest from publicly-traded fossil fuel companies. The administration shut down the Low Memorial Library—Columbia's central administrative building, where the protest is being staged—on Thursday evening. The president is working remotely.

"We can't rotate our people in and out," said occupying senior Lucas Zeppetello. "The words 'fossil fuel divestment' have not come up in any conversations with administrators. They have just wanted to remind us how many events we've disrupted."

Student organizers said that this marks the first time the administration has threatened suspension over the course of their four year campaign. Columbia University did not immediately respond to a request for comment.

The Low Memorial Library is a domed building with grand ionic columns on the school's main campus. It contains the visitor center, in addition to administrative offices, and hosts campus events, student tours, and sports banquets. All Low Library events have been moved out of the building since Friday morning, including a Journalism Alumni Weekend Awards Lunch for 385 guests, and the the Men's Basketball Annual Dinner.

An e-mail from Goldberg to the occupying students confirms the shutdown. "You are already on notice that numerous events have been and continue to be canceled or moved because of your unauthorized presence in Low," Goldberg wrote on Sunday, "and that each event your presence causes to be cancelled or moved will be part of a separate violation charged against you."

Student organizer Daniela Lapidous countered that the administration's decision to completely shut down a campus facility while seven students sit in one hallway is an overreaction, and a scare tactic. "We just meant to shut down the President's office, but they moved events and shut down the building, and are using it as leverage to punish us," she said on Monday.

Columbia's Divest For Climate Justice Campaign launched in the fall of 2012, and has been marked by numerous sit-ins, protests and conversations with President Bollinger over the years. The group's demand is that Columbia freeze all investments in the top 200 publicly traded fossil fuel companies, according to the Carbon Underground 200 list, and divest completely by 2020.

Because Columbia is not transparent with its investments, the extent to which the school invests in fossil fuels is not publicly available. According to student organizers, the average endowment invests about 4 to 5% in fossil fuels. Apply that estimate to Columbia's $9.2 billion endowment, and that comes to an investment between $368 and $460 million. 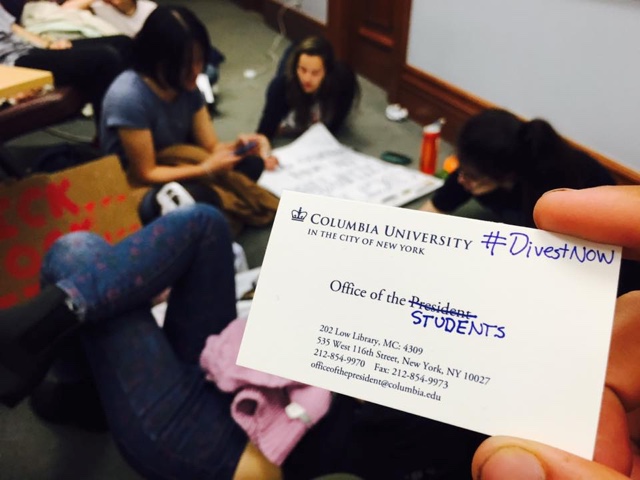 In a statement issued Sunday night, the Columbia College Student Council called the threat of suspension an "overly severe sanction" for a non-violent protest.

A group of 30 Columbia faculty members from the school's Earth Institute issued a statement in early March urging the University to divest from coal and direct any fossil fuel investments to companies that are investing in renewable energy. But the school's Advisory Committee on Socially Responsible Investing (ACSRI) said in November that it wouldn’t endorse divestment, suggesting only that the university form a committee to discuss environmental-friendly policies.

In her e-mail to occupiers on Sunday, Goldberg wrote that, "The President will not meet with an organization whose members are in active violation of University rules... the first step toward achieving your goal of a meeting would be to cease violating the rules now."

Lapidous said the occupiers have no plans to pack up. They've been communicating with fellow students through open windows in the building, and the administration has allowed them to receive takeout food.

"[The administration has] basically engaged in scare tactics to get us out, rather than taking the simple step of divestment that their own faculty is calling for," Lapidous said.

[UPDATE 5:00:] "Columbia University is defined by its embrace of freedom of expression and open debate, a commitment apparent on our campus every day," said the University in a statement. "But our rules and values do not allow students to limit the speech or infringe on the rights of others in our community."

#columbia university
#Divest
#fossil fuels
#Lee Bollinger
#Low Library
#Occupation
Do you know the scoop? Comment below or Send us a Tip