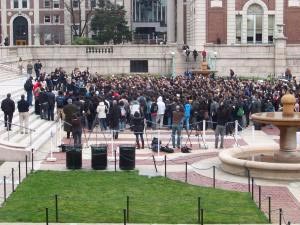 The 14-year-old boy held for second-degree manslaughter in the death of a Columbia graduate student appeared in family court yesterday, as lawyers, police officials, and an aunt who cares for him weighed in. A judge assigned the boy, named Sheldon, lawyers and decided he would be tried as a juvenile offender in Family Court.

A city Law Department attorney told the court, "This attack was predatory in nature." The boy, named Sheldon, had punched 24-year-old Minghui Yu in the face on a Broadway median at West 122nd Street Friday night. After a struggle, Yu ran into the street and was fatally struck by a vehicle.

Sheldon, described as "teary" and "weeping" in court, is being held in a juvenile facility. While the police claimed Sheldon, who admitted he was involved with Yu's death, showed no remorse, his aunt told reporters after the hearing, "He's very sorry. He cries night by night." She blamed his friends, calling them "thugs," and said her nephew is "a very good boy. He’s not a thug. He’s a game head. He plays Xbox." According to the NY Times, a probation officer testified Sheldon was in counseling when he was younger and that he didn't get along with his mother, who lives in Florida and suffers from depression. He now lives with his aunt in the Bronx.

Columbia faculty and students held a vigil for Yu on campus yesterday. Columbia president Lee Bollinger said he spoke to Yu's father, "There is nothing you could say to the parents of a young person, or any child, to begin to make up for the sense of loss.” Senator Chuck Schumer is helping Columbia aid Yu's parents in getting their visas to come to NY expedited--Schumer said, "These parents have already suffered such a great loss and do not deserve to now be caught in a bureaucratic morass."

Photograph of the memorial for Yu by Bwog

#attack
#columbia university
#Minghui Yu
#morningside heights
#nypd
Do you know the scoop? Comment below or Send us a Tip