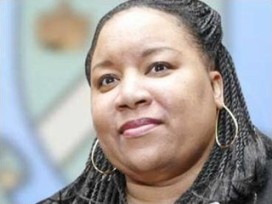 Earlier this year, the Teachers College sanctioned Constantine for plagiarism, after an 18-month-long investigation stemming from students' and a former faculty member's complaints. Constantine called the probe a "conspiracy" and "witch-hunt," accusing the Teachers College of retaliation, targeting her, one of the two tenured black women professors at the school, and slamming her accusers. (It should be noted two of the graduate students accusing Constantine of plagiarism are minorities, one black and one Asian). For instance, her lawyer sent a spreadsheet to the Sun, trying to debunk the claims, but one of the accusers said, "An independent law firm and a faculty committee at Teachers College both found Constantine guilty of plagiarism based upon documentation provided by myself (and others), as well as by Constantine. As a faculty member in the department where drafts of my work were filed, she had access to my work long before it was published."

The school's letter notifying faculty of Constantine's dismissal also noted that Constantine's publicizing of the plagiarism probe, as well as her criticisms of her accusers, played a role in the decision. Karen Cort, whose work had been apparently used by Constantine, said she was satisfied with the outcome, "It saddens me that she's using racism. I think racism is a real thing, but I don't feel this investigation was against her because she's a black woman. It was because she abused her power."