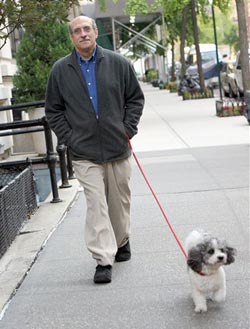 Columbia professor Martin Chalfie (pictured) was named one of the three winners of the Nobel Prize in Chemistry this year. Chalfie, Osamu Shimomura of the Marine Biological Laboratory in Woods Hole, MA, and Roger Tsien of University of California, San Diego shared the prize "or the discovery and development of the green fluorescent protein, GFP."

The Nobel Prize committee explains that GFP, "the remarkable brightly glowing green fluorescent protein...first observed in the beautiful jellyfish, Aequorea victoria...has become one of the most important tool in contemporary bioscience." By using GFP, scientists can watch previously invisible processes, "such as the development of nerve cells in the brain or how cancer cells spread." Oshimomura was the first to isolate GFP, Chalfie show how it could be used as a "luminous genetic tag," and Tsien contributed how it fluoresces (and how it can glow in different colors).

Chalfie said he slept through the phone call from from the Royal Swedish Academy of Sciences to tell him of his win, so he ended up finding out he won by looking at the Internet! He said he checked online because, "You do wonder [who will win] every October." And he said of his work, "You don't do it for the recognition. You do it to answer a question." More about GFP's use in bioscience in this 2001 Forbes article.