Columbia Professor Says She "Will Not Be Silenced," Police Continue Hate Crime Investigation 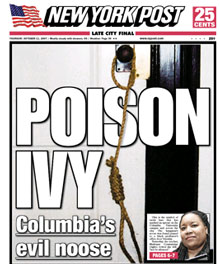 The professor at Columbia University's Teacher College whose office door was found with a noose on it spoke out for the first time yesterday. Madonna Constantine told students that gathered for a rally, "This is a heinous and highly upsetting incident. I am upset that our community has been exposed to a blatantly vile incident like this. It is an act of cowardice. I would like the perpetrator to know that I will not be silenced."

The police have no suspects in the hate crime, but emphasized that they did not believe Constantine put the noose on the door herself. Deputy Inspector Michael Osgood said, “Our victim is a victim." The police are testing the rope's fibers for DNA evidence; they also say the other professor who Constantine is feuding with, Professor Suniya Luthar, is not a suspect.

Mayor Bloomberg issued a statement calling the act "despicable and disgraceful," and Borough President Scott Stringer and State Senator Bill Perkins attended the rally outside Teachers' College. The Columbia Spectator reports that Perkin was disturbed someone with a Columbia ID and knowledge of the building put the noose on Constantine's door, "It’s as if a burning cross was placed on the campus of Columbia University. This sounds like an inside job.” "

Some Columbia students met with Columbia president Lee Bollinger, who faced criticism he was not visible enough to denounce the incident. Bollinger said, “I want you to feel and just to acknowledge in yourselves that this is a place that cares a lot about things that you have raised," and added that he let Teacher College president Susan Fuhrman take the lead in alerting her community. Students weren't totally satisfied and questioned Columbia's commitment to diversity.

Constantine also spoke to Good Morning America this morning, "I know I don't really have a reason to be embarrassed about it because this was the work of someone who, you know, is not a secure person at some level, but it felt as though it was directed toward me...It felt very personal and very degrading."

Update: The Sun reports that the NYPD has requested surveillance videos from Columbia, but the school refused to hand them over without a subpoena.

Update 2: Columbia says it is cooperating with the investigation and that the earlier report that it refused to turn over tapes was incorrect. A spokesperson says, "We are giving the tapes to the police."