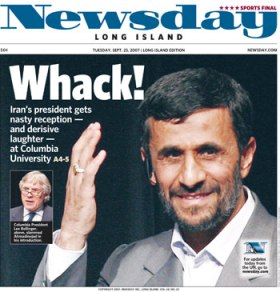 Columbia University has weathered storm of criticism for inviting Iranian president Mahmoud Ahmadinejad to speak at its World Leader Forum yesterday. Columbia president Lee Bollinger had said that critical questions would be posed, and he wasn't kidding: Before Ahmadinejad spoke, Bollinger gave a lengthy speech that attacked the leader's positions and intelligence, said he exhibited "all the signs of a petty and cruel dictator," and called him ridiculous. You can read Bollinger's speech here, but here are his final words:

Let me close with this comment. Frankly, and in all candor, Mr. President, I doubt that you will have the intellectual courage to answer these questions. But your avoiding them will in itself be meaningful to us. I do expect you to exhibit the fanatical mindset that characterizes so much of what you say and do. Fortunately, I am told by experts on your country, that this only further undermines your position in Iran with all the many good-hearted, intelligent citizens there. A year ago, I am reliably told, your preposterous and belligerent statements in this country (as in your meeting at the Council on Foreign Relations) so embarrassed sensible Iranian citizens that this led to your party’s defeat in the December mayoral elections. May this do that and more.

I am only a professor, who is also a university president, and today I feel all the weight of the modern civilized world yearning to express the revulsion at what you stand for. I only wish I could do better.

This prompted the Post to headline its story, U. DA MAN! BOSS HITS IRAN PREZ WITH THE OL' COLLEGE FRY and Newsday says Bollinger is standing tall. The Daily Intelligencer even thinks that Bollinger is having the Best Week Ever! The Daily News wasn't having any of Bollinger's strong rebukes of Ahmadinejad. Michael Goodwin writes a column saying it's too little, too late, while an editorial still finds Columbia's actions infuriating (though Bollinger was creditable): "It was cheap theater, and it cheapened a great university."

The NY Times has an editorial questioning the behavior of NYC politicians who have been slamming Columbia's decision to invite Ahmadinejad: "Unlike Iran’s citizens, Americans have the right to laugh at leaders, as well as protest Mr. Ahmadinejad’s visit and Columbia’s decision to schedule his speech. The threats of possible sanctions against Columbia were an insult to that freedom."