Columbia May Take Some Expansion Cues From Penn 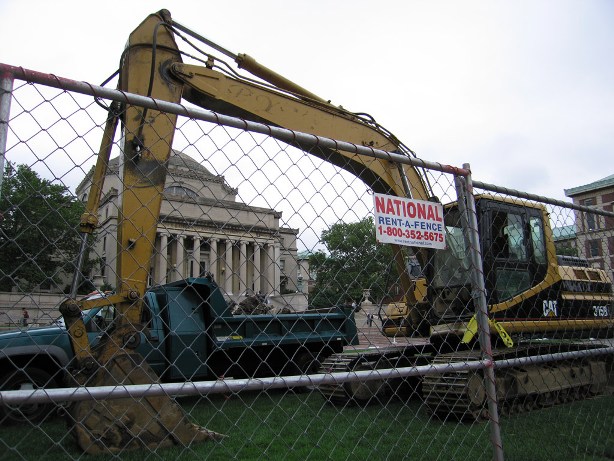 The Observer's Matthew Schuerman has a few interesting stories about Columbia's Manhattanville expansion plans. An article published today looks at how the University of Pennsylvania's successful (and more community-embraced) urban transformation could potentially inform Columbia's plans, now that former Penn president Judith Rodin's book, The University & Urban Revival has hit the bookshelves. Rodin, now the president of the Rockefeller Foundation, only says that the conversations she has had with Columbia president Lee Bollinger have been minimal. She also said, "Columbia has a much tougher job. They are incredibly landlocked and so the stakes are even higher. Unless [Columbia and the community] work together, it is not going to work."

There's also a spotlight on Bill Lynch, consultant paid by Columbia, who is organizing a grassroots campaign to support the school's Manhattanville plans. Lynch, "a former deputy mayor and well-known Harlem figure," says people "are supportive of the expansion because of the jobs they have heard about and their past involvement in Columbia."

And finally, Schuerman follows up on the Sun's story about Manhattanville's largest private landowner, Nick Sprayregen. The Sun reported that Sprayregen, who opposes Columbia's plans, had spent $500,000 to fight Columbia's efforts so far; plus, his properties' value would go up if Columbia didn't seize land through eminent domain. Now it looks like Harlem City Councilman Robert Jackson is looking to remove Sprayregen from the West Harlem Local Development Corporation, because of the financial conflict of interest.

See, it turns out Sprayregen applied to rezone his properties for potential residential and community use. Sprayregen tells the Observer, "They are messing with the wrong person here. I have done nothing wrong; there are no conflicts of interest in what I am doing and what is in the true best interests of the West Harlem community. I merely want to retain ownership of my properties and continue to operate my businesses. Should I succeed in this, not only does my family benefit, but the community does as well.”