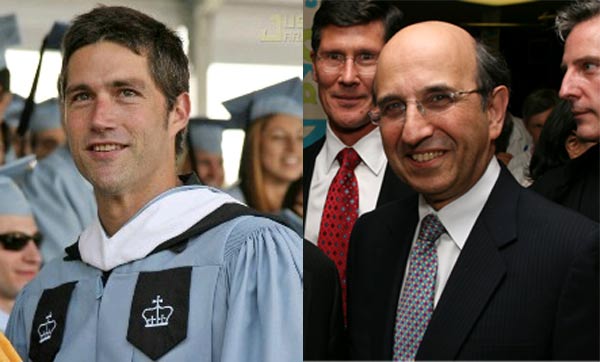 In 2006, the graduating class of Columbia's undergraduate college had Senator John McCain as a Class Day speaker. Last year, it was actor Matthew Fox. And this year's speaker will be...Schools Chancellor Joel Klein! To which seniors said, "I don't know anything about him" and "I have no idea who he is."

The Columbia Spectator had an editorial criticizing the student council's policy for picking people with connections to Columbia (Fox and Klein are alums, McCain's daughter attended), writing:

Those few students who are well-versed in the politics of the Bloomberg administration will be excited to hear Department of Education Chancellor Joel Klein, the architect of the city’s controversial education policy, speak. Most, however, will need a detailed press release to simply identify him.

And the editorial notes that Klein will inevitably be compared to other Ivys' speakers--Princeton has Stephen Colbert, Harvard has JK Rowling and Penn has Mayor Bloomberg. Clearly, Barack Obama, class of '83, was too busy!

When Fox was announced as last year's Class Day speaker, there was an uproar. However, he gave a pretty charming speech and looked good in the blue robe. But a great commencement speech is playwright Tony Kushner's from 2004--he acknowledges being fourth choice.

#Columbia College
#columbia university
#joel klein
#matthew fox
Do you know the scoop? Comment below or Send us a Tip
A new Gothamist is coming! We’ve moved comments over to our beta site. Click here to join the conversation and get a preview of our new website.