Columbia Grapples With Another Hate Crime 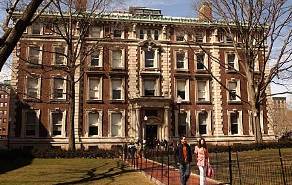 Yesterday morning, a swastika and a caricature of a yarmulke-wearing man were found in a building at Columbia University. This is the second hate crime in as many days found at the school's campus - a noose was found on the door of a Teachers College professor earlier this week.

The graffiti was in the men's bathroom at Lewisohn Hall, where the School of General Studies is located. Columbia President Lee Bollinger, who was criticized for not being more visible after a noose was found outside a Columbia Teachers College professor's door, wrote in an email to the community, "When words are the offender, as in this incident, I am reluctant to draw attention to them and will exercise restraint in doing so going forward. I do not want to broadcast, in any way, the message they attempt to send or empower those behind them." E-mails from School of General Studies Dean Peter Awn and Bollinger are after the jump.

The police, along with the FBI and Justice Department, are still investigating the noose incident. Yesterday, the NYPD criticized Columbia for not turning over surveillance tapes quickly, noting that the perpetrator could devise a story with more time, while Columbia defended its request for a subpoena, saying that it's standard education institution procedure for ask for one and that students' privacy are at stake. But the Post thinks Columbia has an "attitude problem": "At best, it shows yet again the contempt Columbia University as a whole has for the community in which it resides, and into which it seeks to expand. "

The professor, Madonna Constantine, whose office door the noose was hanging on, told the NY Times, "I really don’t have any idea of who could have done that. Is there anything that I’ve experienced that’s close? I would say no.”

To all GS students:

It is very distressing to report that anti-semitic graffiti was found in a bathroom stall in Lewisohn Hall. These kinds of hateful crimes directed against the Jewish community or any other individuals or groups will not be tolerated. I have been a member of the Columbia faculty for thirty years and know that we as a community stand for values that are completely antithetical to such vile and hate-filled images. Let us seize this occasion to renew our commitment to the values of inclusiveness, respect, and toleration that we all cherish. And let us make clear to one another that we will not allow such cowardly hate-mongering to divide our community. I can assure you that the Office of Public Safety and the New York Police Department are conducting a full investigation of this incident .

I am saddened to report that one of the bathrooms in Lewisohn Hall was sullied with an anti-Semitic smear. It has been promptly
removed and is now being investigated.

I want to make two points. When words are the offender, as in this incident, I am reluctant to draw attention to them and will
exercise restraint in doing so going forward. I do not want to
broadcast, in any way, the message they attempt to send or empower those behind them. Despite the irrational, destructive hatred that persists in our society and world, we do not accept this anywhere at this University. No one among us should feel marginalized or threatened by words of hatred. We are one community; and as one community, we will overcome these hateful acts and hold each other to the highest standards of respect for the dignity and diversity of every individual.

In response to questions students have raised, I also want to
reassure you that we have utmost confidence in our Public Safety
officials and in the NYPD. Not only do they have well established
communications protocols in place when there is an immediate threat of harm; they distinguish crimes that threaten our physical safety from incidents like the one that occurred today.