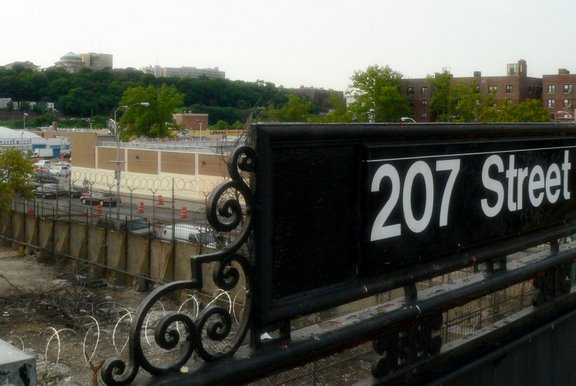 A Columbia grad student, Arun Wiita, and the New York Civil Liberties Union brought a lawsuit against the NYPD last Thursday. Over the summer, Wiita was photographing a subway station entrance and its surroundings at 207th Street and 10th Avenue as part of an ambitious 10-day photography project. He was detained by police, handcuffed and held for 30 minutes; now Wiita is "seeking compensatory damages and reimbursement of legal fees." He believes that his South Asian or Middle Eastern appearance made him a target.

According to Metro, "police sources said officers question people photographing the city’s rail infrastructure on rare occasions, citing instances in which law enforcement officials have identified men taking photographs of city bridges and subways as Iranian intelligence agents and suspected Pakistani terrorists who were stopped by police while taking pictures of the Brooklyn and Williamsburg bridges." We asked Wiita a few questions about the incident as well as his photography project (which sounds pretty amazing; he sent us the above shot which was taken just before he was handled by the long arm of the law).

Can you describe the photography project you were working on?
The project was designed as a way to document how the subway is an integral part of the fabric of life in the city. I love how it is the grand unifier across race, class, and geography in the city. I wanted to photograph both the inside of every subway station (predominantly decorative aspects, such as artwork and signage) as well as the immediate surroundings of each station in order to document the people, architecture, and general feel of the area. After the arrest, I greatly cut down on taking any photos inside of subway stations out of fear of further hassling by the cops.

What did the police say when they approached you?
At first an uniformed officer approached me on the SW corner of 207th St. and 10th Ave. in Manhattan; he basically said, "Hey, what are you doing?". I explained I was a grad student at Columbia and my motivation for the photo project. He subsequently asked to see the photos and to see my ID, which I cooperated with. I gave him my NJ driver's license and my Columbia ID. He said that since I didn't have a NY State ID he couldn't run my information over the radio, and he would have to take me into the station at 145th St to check it out "in front of his peers". He then asked me to turn around and put my hands behind my back and then he handcuffed me.

What outcome would you like to see from the Civil Liberties lawsuit?
From this incident it was clear to me that the NYPD has absolutely no idea how to handle photographers on the streets of New York. My main motivation for the lawsuit is for the police to change their policies and actually implement some type of training so that cops know what to do when they have suspicions about someone taking photos. This certainly includes not being able to just harass and handcuff anyone holding a camera.

Wiita also pointed out to us that taking these photos was legal, point-and-shoot photos
are explicitly permitted in the MTA rules section 1050.9(c). In the end, he did end up documenting all 468 stations, but felt uncomfortable taking photos at 168 of them because he thought it looked "suspicious". In the future he'll be creating an interactive website which will include his photos and notes.