An 18-year-old Columbia student died after falling to her death from a dormitory on West 114th Street in Manhattan last night. According to Bwog, Martha Corey-Ochoa, Class of 2016, jumped around 11 p.m. from the fourteenth floor. Dean Kevin Shollenberger sent an email to students saying, "Whenever there is a death such as this, we are all struck by a wide range of emotions and a deep sense of loss. Especially during this difficult time, please rely on one another, your family, and University offices for support. I encourage you to seek guidance from professional staff by visiting or calling Counseling and Psychological Services."

Corey-Ochoa's body landed on West 114th, and a witness told the Post, "Everyone was out here seconds after it happened. Everyone was in the street, it was packed." CPR was performed, but the woman died at St. Luke's-Roosevelt Hospital. While the Post reports that the incident is being treated as an apparent accident, the Daily News says that the police think it was a suicide: "Police don't believe it was an accident, as the young Ivy Leaguer had a history of psychiatric problems, a source said. 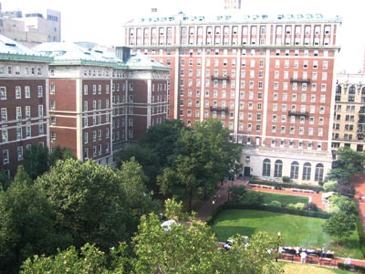 In a September 2011 Patch article highlighting Dobbs Ferry National Merit Finalists, Ochoa-Corey was portrayed as a having a rigorous school schedule:

"Martha Corey-Ochoa has a challenging academic schedule with four IB classes and AP Calculus, but still manages to find the time to work on independent projects such as her novel (a political romance set in the 17th century) as well as compose music (a sonata for violin). She has played the violin since 3 rd grade and is a member of the Dobbs Ferry High School orchestra. She has also participated in the Westchester Youth Orchestra and All-County Intermediate Orchestra. She said, 'Music inspires my writing. I love analyzing music and literature and making connections between disciplines.' A member of the Spanish Honor Society, Ms. Corey-Ochoa wants to study English next year in college."

#apparent suicide
#college
#columbia university
#dorm
#john jay dorm
#martha ochoa-corey
Do you know the scoop? Comment below or Send us a Tip