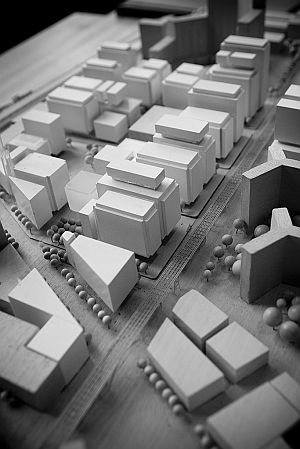 “I don’t think we should rush to give Columbia University a Christmas present,” city councilman Charles Barron said before voting against Columbia University’s 17-acre, $7 billion dollar expansion plan. But though many council members dissented or declined to vote, the plan was approved yesterday by the city council, who voted a month earlier than expected. The stage is now set for what could be a fierce eminent domain battle between the university and some commercial hold-outs in Harlem’s Manhattanville neighborhood, which was rezoned by the council from light manufacturing to mixed use.

The university intends to tear down all but three buildings to make way for a new campus housing science and research laboratories. The expansion is expected to take at least 20 years to complete, and will eventually cover a swath of Harlem bounded by Broadway on the east, Riverside Drive on the west, West 129th St on the south and West 133rd St on the north. Check out some of the future campus’s sweet new features:

Yes, that last one was our little joke, but this isn’t: While Columbia has sworn not to pressure the state to invoke eminent domain for the residential buildings in the area, they are leaving that option open for commercial property owners who are refusing to sell. But to show a little heart, the university has committed to a “community benefits agreement” that includes a grant of $150 million to residents of the area, which would be divvied up during the next 12 years for a housing fund, a new K-8th grade school, and a massive, gold-plated door to hit residents in the ass on the way out of the neighborhood.

At a City Hall rally to oppose the plan, Tom DeMott, the leader of the Coalition to Preserve Community, dismissed the vote as “the worst kind of undemocratic, unparticipatory process that you can imagine.” The Columbia Spectator also quotes Nellie Bailey, president of the Harlem Tenants Council: “This vote today is one of political expediency for the purpose of [Council Speaker Christine] Quinn’s mayoral bid.” During the council meeting, Quinn dismissed the accusations as “absurd statement[s].”

And according to the Times, Columbia officials say the expansion is simply necessary to keep up with the Joneses; that fancy-boy Yale college won’t shut up about their 136 acre pharmaceutical site and those Harvard snobs are building a new science complex on a 300-acre site! There doesn’t seem to be any end in sight to the corporate university pissing contest – at least not until Columbia and N.Y.U. divide Manhattan in half and turn all our apartments into dorms.