Columbia Agrees to Some of Hunger Strikers' Demands 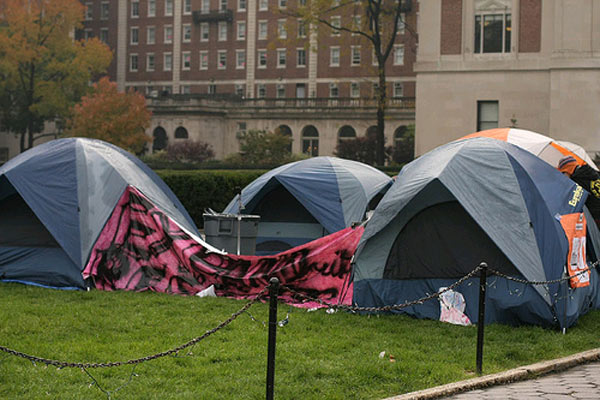 That group of Columbia University students staging a hunger strike is at least a little victorious, if starving, today. Last night, the university agreed to a number of demands relating to the students' concerns that not enough was being down to encourage ethnic studies and understanding other cultures (especially in the wake of recent hate crimes). From the Columbia Spectator:

The University has committed to pay for the expansion of the Office of Multicultural Affairs and to transform the major cultures requirement of the Core Curriculum into a seminar-style class at a cost of $50 million, according to a statement released late last night by the ad hoc coalition in support of the strike. Currently, students choose their major cultures course fulfillments from lists of lectures and seminars across several different departments and regions.

In spite of some other students' ridiculing the hunger strike, a number of student groups and professors voiced their support and, last night, a few hundred people held a candlelight rally for the strikers.

The Columbia Hunger Strike! website notes their satisfaction with negotiations, some students - who have been camped out in tents in the center of campus - are still on strike to protest the school's planned Manhattanville expansion: "Significant advances have been made, but much remains to be resolved until students return to their daily lives. The victories of the day show what power students organizing for justice can have. Today more than ever, the struggle continues."

#A Day
#affairs
#anorexia
#Columbia Spectator
#columbia university
#flickr
#news
#office
#people
#photos
#protest
#strike
#the office
#The University
#university
Do you know the scoop? Comment below or Send us a Tip