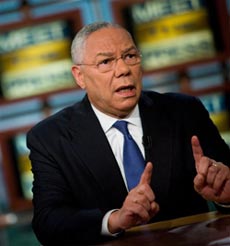 During an appearance on Meet the Press, former Secretary of State under President Bush (and native New Yorker) Colin Powell announced his endorsement of Barack Obama, the Democratic candidate. He said he had been studying both candidates in the past few weeks and concluded that Obama was a "transformational figure," citing his inclusive campaign and intellectual curiosity.

Powell, a more moderate Republican, described his admiration for Republican candidate John McCain, but expressed his deep reservations about the McCain campaign. In the past few months, Powell questioned McCain's recent judgment (including the selection Sarah Palin as running mate), McCain's approach to the faltering economy, the Republican party's movement to the right ("I would have difficulty with two more conservative appointments to the Supreme Court, but that's what we'd be looking at in a McCain administration."), and the way some members of the Republican Party were painting Obama as a Muslim ("What if he is? Is there something wrong with being a Muslim in this country? The answer is no.") Here's his explanation leading up to the endorsement:

Meet the Press moderator Tom Brokaw said, "There will be some ... who will say this is an African-American, distinguished American supporting another African-American because of race," to which Powell replied:

"If I had only had that in mind, I could have done this six, eight, 10 months ago. I really have been going back and forth between somebody I have the highest respect and regard for, John McCain and somebody I was getting to know, Barack Obama. And it was only in the last couple of months that I settled on this."

The NY Times reports that talks are underway between Obama's campaign and Powell, about whether the retired, 4-star general will campaign for Obama.

#barack obama
#colin powell
#endorsement
#john mccain
Do you know the scoop? Comment below or Send us a Tip