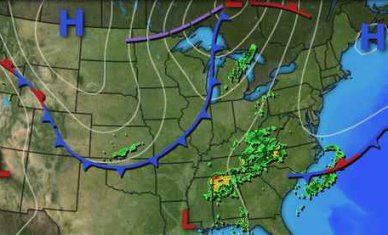 Today's weather forecast features an exciting race between the remnants of surprising Hurricane Humberto and the Canadian Crusher, a massive, cool, dry air mass that has already captured the Great Plains and is quickly moving our way. Humberto, who reminded everyone that there's still a lot to learn about tropical storms, intensified from a tropical depression to a full-fledged hurricane in only 14 hours, is now just a big mess of moisture centered over northern Alabama.

That disturbance is heading northeast, bringing much needed rain to Alabama, Tennessee and Georgia. Later today the storm remnants will run into the cold front that is sinking across the country. Once the two clash the storm is expected to surf the cold front up through the Carolinas and out to sea.

Some of the storm's moisture may make it this far north tonight. Rain is likely between about midnight tonight and late tomorrow morning. Once that rain disappears the weekend will be very pleasant. Highs tomorrow will be around 70 degrees. Sunday is expected to be slightly cooler and totally sunny. Clear skies and seasonable temperatures are expected for much of next week.

#death
#east coast
#Great Plains
#health
#hurricane
#Hurricane Humberto
#joe schumacher
#once
#race
#rain
#storm
#weather
Do you know the scoop? Comment below or Send us a Tip
A new Gothamist is coming! We’ve moved comments over to our beta site. Click here to join the conversation and get a preview of our new website.