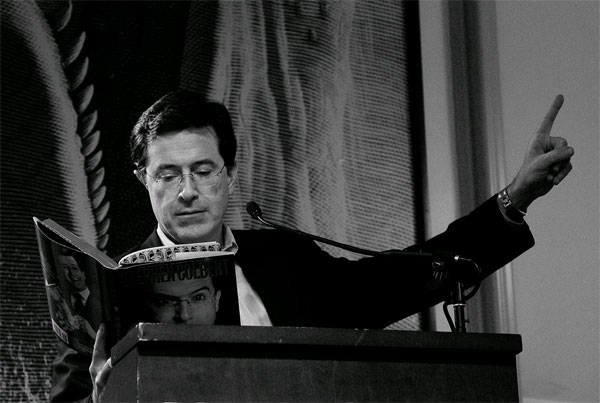 Last night, Stephen Colbert had a reading for his book I Am America (And So Can You) that was full of fans of truthiness and enemies of bears. The Washington Square News reported that the erstwhile maybe-presidential candidate said, "It's time to impregnate this country with my mind."

Unexpected, though, were probably the members of a theatrical anti-war group, Sparkle and Cybil War, who were decked out as "patriotic Texas oil baronesses with patriot missile strap-ons," "bras worn fashionably over their shirts (the better to complement their red and blue fishnets and boas)" and "American flag bandannas," according to Radar. No word if large bags of campaign-finance law-abiding Doritos were present.

If you worried that Colbert doesn't care about other candidates by throwing his hat into the ring, think again. At his 92nd Street Y appearance Tuesday night, Colbert said, "I would love to see a President Huckabee because if our president were named ‘Huckabee,” how bad could anything really seem?… It’d be as if the entire country was animated by Hanna Barbera. Can you imagine the Huckabee Monument?"

Photograph by dietrich on Flickr who notes that the 7PM event was standing room only by 5:30PM