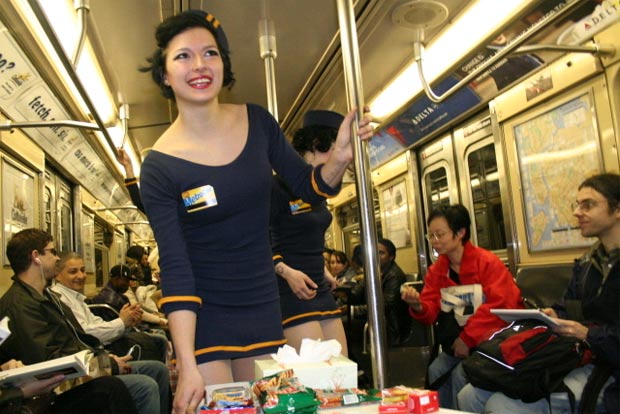 Photographs by Alex Nathanson on Indymedia

Over the weekend, on a select group of subway lines, a group of subway stewardesses tried to introduce straphangers a more civilized commute. Four performers from Boring Inc. became "MTA Service Specialists" wheeled trolleys of snacks, tissues and more into stations and onto trains.

According to their website, the MTA Service Specialists believe "If you need something, you say something." And Kae Burke, who organized the project, told Indymedia, "Commuters deserve helpful, courteous service with a smile while riding the erroneous MTA."

Indeed: One passenger, 44-year-old Steven Faria, told the Post, "With these girls, I'd be on the train all day. You'd have 1000 percent ridership." Or support for more mass transit funding? Send these ladies to Albany, stat!

Speaking of the MTA, there will be another MTA webinar today at noon, to discuss the proposed Capital Program. We bet MTA executive director Lee Sander will address questions about the fate of the program now that congestion pricing revenue won't be around. And we hope it turns out better than the December webinar.

#Boring Inc
#MTA
#MTA Service Specialists
#subway
Do you know the scoop? Comment below or Send us a Tip