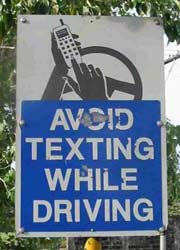 A state senator from Long Island is proposing that texting on one's mobile phone while driving should be illegal. It's already against the law to talk on a phone while one is driving. Studies have shown that that is about as distracting as being drunk behind the wheel. One can only imagine how distracting texting--which involves digital manipulation and reading, versus simply talking--could be in comparison.

State senator Carl Marcellino is the legislator who intends to announce the ban. Supporters point out the obvious that reading messages on a cellphone while driving involves taking one's eyes off the road. It's also a good guess that only a young person too young to have a drivers license is adept enough at texting that he or she could do so without removing both hands from the wheel. Sadly, that's not even the case.

A ban on texting while driving is not legislation rooted in guesswork unfortunately. A study by insurance company Liberty Mutual found that 37% of teenagers found texting "highly distracting" while they were behind the wheel. One depressing story of how a young person killed a cyclist while texting his friend can be seen here. Punishment for killing a 63-year-old grandfather and cyclist in Denver: community service.