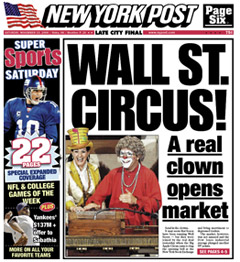 Yesterday morning, the New York Stock Exchange's opening bell was rung by Grandma the Clown from the Big Apple Circus. The Post has details on what happened next: Master of Ceremonies Carrie "Harvey and Grandma wandered the floor trying to spread joy and merriment, placing funny red noses on exchange officials to touch the funny bones of even the most shaken traders."

Alas, though stocks attempted a rally, the Dow Jones Industrial Average fell 337 points (-3.8%), while the S&P 500 fell 4.2% and the Nasdaq dropped 5%, thanks to businesses' diminished outlooks and news of layoffs (Sun Microsystems is laying off 6,000 workers, Citigroup may cut up 35,000). One trader told the Post that the clown didn't help, "There was no lighter mood on the floor. Living this day in and day out is not fun." 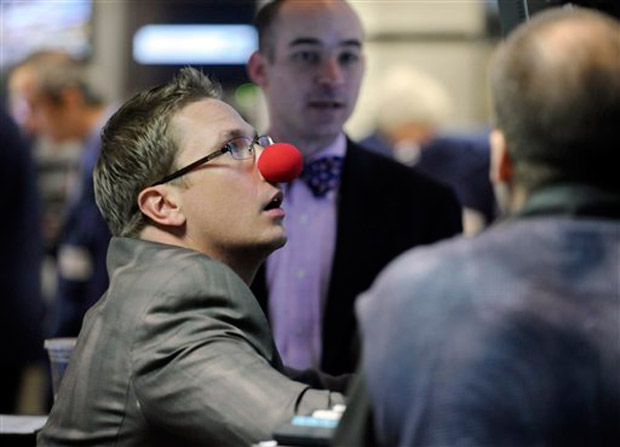 And a Chicago securities firm's chief market strategist observed, "It's like they're trying to be the Make-A-Wish Foundation, cheering up a terminally ill child. It's a great metaphor for a financial system that has become a joke... It's great to try to create some levity, but there is definitely some unintended symbolism here." Still, Harvey and Grandma the Clown both felt privileged to be there, with Harvey saying, "It was so magical."

#business
#clown
#economy
#new york stock exchange
#nyse
Do you know the scoop? Comment below or Send us a Tip