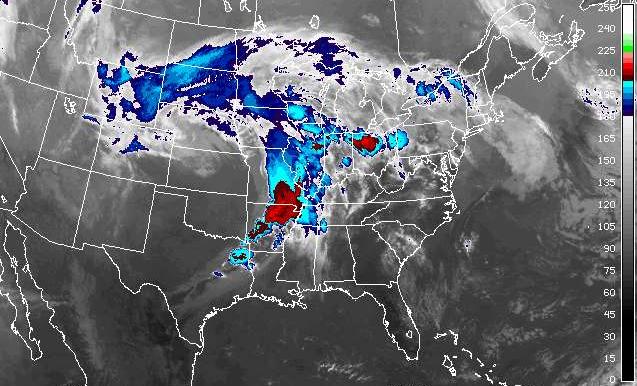 Today marks the sixth straight cool day and it looks like it will take until Monday for seasonable temperatures to return. A minor atmospheric skirmish will keep temperatures down through the weekend. In one corner a warm front is approaching from the south. In another corner a high pressure system is slinking down from eastern Canada. It appears that the high will cause the warm front to stall before it passes through the city, leaving us on the cool, wet side of things.

Clouds are pretty much guaranteed all day today, holding the high to around 60 degrees. There's a slight chance of light rain or drizzle. The stalled front isn't expected to move tomorrow so expect another mostly cloudy, cool day with a slight chance of light rain or drizzle. Late Saturday a low pressure system from the west will begin to break the stalemate. Sunday is likely to be rainy and maybe a little warmer. Next week is currently looking sunny and seasonable, with highs in the upper 60s.

April finished 2.4 degrees warmer than average. The first four months of 2008 have each been warmer than average, making this the ninth warmest start to a year since records began in Central Park in 1869. The warmest start to a year was 2002, when Jan-Apr averaged 45.2 degrees. The coldest start of 31.6 degrees occurred in 1875. For you statistics geeks, there's almost no correlation (r-squared = 0.11) between the January-April average and the annual temperature.