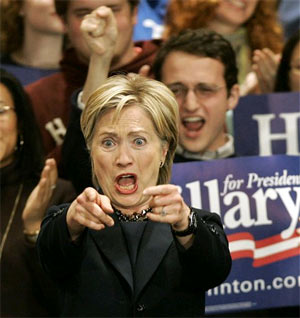 Spitzer's most recent iteration of the plan involves a three tiered system that neither state Democrats, Republicans or illegal immigrants' rights advocates seem to like very much. Anyway, here's what Clinton said during the debate when questioned by NBC Washington bureau chief Tim Russert:

Russert: Senator Clinton, I just want to make sure of what I heard. Do you, the New York senator, Hillary Clinton, support the New York governor's plan to give illegal immigrants a driver's license?

You told the New Hampshire paper that it made a lot of sense. Do you support his plan?

Clinton: You know, Tim, this is where everybody plays "gotcha." It makes a lot of sense. What is the governor supposed to do? He is dealing with a serious problems. We have failed. And George Bush has failed. Do I think this is the best thing for any governor to do? No. But do I understand the sense of real desperation, trying to get a handle on this? Remember, in New York, we want to know who's in New York. We want people to come out of the shadows.

He's making an honest effort to do it. We should have passed immigration reform.

[Full transcript of debate here.] Realizing that hemming and hawing wasn't the way to go, her rivals used this response as proof of her proclivity to flip-flop and even Democrats were disappointed - former Clinton adviser James Carville said, "As someone who loves her ... this was not her best performance." And former Mayor Rudy Giuliani got into the act, saying, "If you can't take a position on something like drivers licenses, what are you going to do about Ahmadinejad?"

Clinton's campaign issued a post-debate statement reaffirming her support of the Steamroller's plan. And now she's on the attack - and using the gender card in criticizing the other (male) candidates. At an event at her alma mater Wellesley College, Clinton said, "In so many ways, this all-women's college prepared me to compete in the all-boys' club of presidential politics." Newsday reports that an e-mail to supporters criticized the male candidates for attacking Clinton and that during a during a conference call with donors, Clinton strategist Mark Penn accused Russert of being much more aggressive on Clinton than other candidates. One donor even said Russert should be shot! (The donor later took back her statement.) Well, we expect Spitzer's team to demand Clinton to appear with him at a press conference to discuss the matter now that she's so supportive.

Today Clinton will be in New Hampshire - the primary is on January 22.

Photograph of Clinton before a campaign speech at her alma mater, Wellesley College, by Elise Amendola/AP