Clintons Follow the Money and Head to the Hamptons 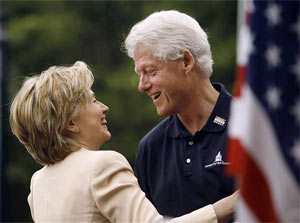 The NY Sun details Senator Hillary Clinton's fundraising agenda in the NY area. Most notably, she and former President Bill Clinton will be on a "48-hour, six fund-raiser blitz" in the Hamptons that includes events at billionaire Ron Perelman's East Hampton home and Entenmann's heir Robert Entenmann's North Fork vineyard. From the Sun:

The Hamptons trip highlights just how crucial New York's wealthy donors are to Mrs. Clinton, and to all of the 2008 presidential candidates. Not only do they write large checks, but they serve as rainmakers who can secure donations from their wealthy network of friends.

Mr. Clinton was the first to mine the Hamptons for political donations and establish the East End as a crucial campaign stop for candidates from both major political parties. Many of the stops he and his wife will be making with hat in hand during the first weekend of August will be to longtime friends and supporters.

It makes sense: If you're paying hundreds of dollars for a $20 dollar bottle of vodka at an East End club, you certainly have enough scratch for cocktails with the Clintons.

And while Senator Clinton has raised a lot of money so far, her main rival Senator Barack Obama has a slight edge on primary money - Obama has raised $34 million to Clinton's $33 million. One campaign finance expert tells Politico, "The Obama cash number is a monster number. That is a lot of cash for a candidate who did not enter this race with a well-established financial base." As for Republican candidates, Rudy Giuliani trailed Mitt Romney in fund-raising, but the former NYC mayor actually has more money in the bank because Romney's been spending more (Romney has also been using his personal funds to finance his campaign).

And last night, Clinton held a "Bowling for Change" fundraiser at the Harlem Lanes; $500 for a ticket, $1000 for a VIP ticket (food, drink and bowling shoe rental included!).