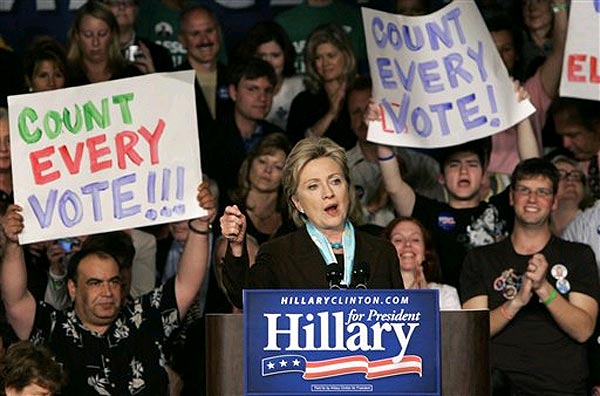 Photograph of Clinton in Louisville, Kentucky by Al Behrman/AP

Senator Hillary Clinton won the Kentucky primary 2-to-1 over Senator Barack Obama, thanks to strong support from working class whites. According to Kentucky exit polls, seven in ten whites supported Clinton which, per the AP, included "about three quarters of those who have not completed college," resulting in her winning 65% to Obama's 30%. 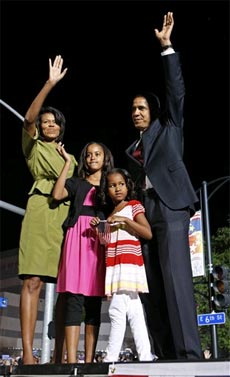 Clinton said, "This continues to be a tough fight, and I have fought it the only way I know how — with determination, by never giving up and never giving in." She also emphasized counting every vote and how she leads the popular vote.

In spite of losing Kentucky, Obama gave a rousing speech in Des Moines, Iowa, alluding to his likely pledged delegate majority, "You have put us within reach of the Democratic nomination for president of the United States. We have returned to Iowa with a majority of delegates elected by the American people.”

He also praised his Democratic rival's Kentucky victory and perseverance, "Senator Clinton has shattered myths and broken barriers and changed the America in which my daughters and your daughters will come of age," but took aim at the probable Republican nominee:

We face an opponent, John McCain, who arrived in Washington nearly three decades ago as a Vietnam War hero, and earned an admirable reputation for straight talk and occasional independence from his party. But this year’s Republican primary was a contest to see which candidate could out-Bush the other, and that is the contest John McCain won.

And Obama has won the Oregon primary.

Right now--not counting projected Oregon delegates-- Obama is within 100 delegates of the 2,026 needed, while Clinton needs 277 delegates to reach 2,026. Apparently his team has started working on putting together a general election team, though a spokesman says that would be premature since Obama hasn't clinched the nomination.

Still, pundits are wondering how Obama can quasi-claim victory when he got pummeled in Kentucky (and didn't spend any time there). NY Times op-ed columnist Charles Blow had an interesting piece about Democratic success in Appalachia over the weekend.

#barack obama
#election 2008
#hillary clinton
#Kentucky
#oregon
#primary
Do you know the scoop? Comment below or Send us a Tip