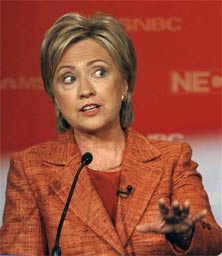 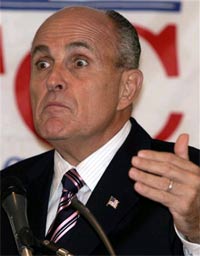 The Associated Press and Ipsos asked Americans to pick which candidates would make the scariest Halloween costumes. Naturally, frontrunners Senator Hillary Clinton and former Mayor Rudy Giuliani won in their respective political parties (there were separate polls for the two parties). Clinton led Democrats with 37% while Giuliani had 14%, and no other candidates broke 6%, giving them resounding wins. And we found this interesting: "While a predictable two-thirds of Republicans picked [Clinton], she also was the choice of 18 percent of Democrats. Among members of her own party, that made her second only to Giuliani as the scariest costume."

Of course, it's easy to make Hillary and Rudy costumes. For Hillary, you need a blond wig with a more matronly professional woman hairstyle, a black pantsuit, and perhaps a shirt showing decolletage. For Rudy, you need a bad combover (we like vintage Giuliani hair) and a cellphone glued to your ear while you say "9/11" over and over again, maybe hold Caroline Giuliani's Facebook page.

And the other week, All Things Considered found checked out the political offerings at Manhattan costume store Abracadabra.