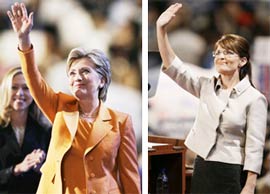 It would have been the first time Senator Hillary Clinton and Alaska Governor Sarah Palin appeared together (for real, not for funny). But once Clinton learned that Palin would be attending the same rally at the U.N., organized by a number of Jewish groups to, per Newsday, "show U.S. opposition to Iranian President Mahmoud Ahmadinejad," Clinton decided she rather not go.

Clinton spokesman Philippe Reines said, "[Palin's] attendance was news to us, and this was never billed to us as a partisan political event. Senator Clinton will therefore not be attending," which gave the McCain-Palin camp a chance to say, "Governor Palin believes that the danger of a nuclear Iran is greater than party or politics. She hopes that all parties can rally together in opposition to this grave threat."

Some Democratic strategists think Clinton's decision was wrong, noting how she has many Jewish constituents. And City Councilman Dov Hikind said, "This is not about politics. This is demonstration. This rally is about unity against Iran that is a sponsor of terrorism."

However, Newsday reports "organizers admitted Wednesday they probably didn't think through the political implications of giving a platform to Palin or that Clinton's camp would see it as violating the nonpartisan spirit of the event." An adviser to one of the sponsor groups said, "We did not see that coming, but that may be right, and that's our mistake." Organizers are reportedly considering whether to invite another Democrat to balance the event.

Additionally, Palin may attend the U.N. General Assembly--it'll be Barracuda in the City!