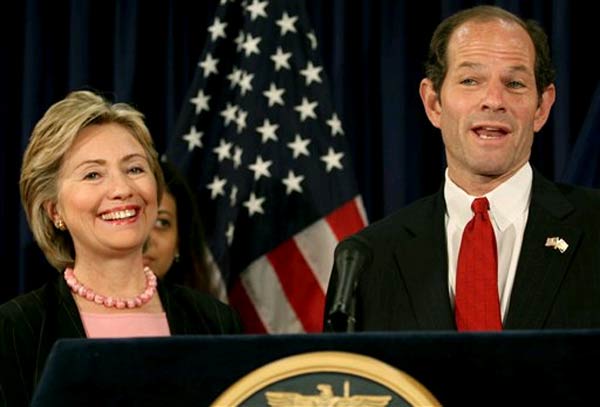 Thought Governor Eliot Spitzer and Senator Hilary Clinton appeared at a press conference to discuss health coverage of New York children, they had to answer questions about campaign donations they accepted from fugitive apparel executive Norman Hsu. Clinton received $23,000 from Hsu and announced that she would donate the money to charity after revelations that Hsu has been wanted in California for defrauding California investors since 1991. Hsu has fled to Hong Kong but has been living in New York as a high-profile donor since 2003. Guess when those cases grow cold, they stay cold.

Spitzer said he would donate $62,000 received from Hsu to charity and Clinton said, "I wish Mr. Hsu well in dealing with the problems he is confronting. Obviously we were all surprised by this news. We will continue to analyze all contributions and take action if that's warranted." Many other politicians who have benefited from Hsu's largesse have said they will donate or refund the money. They include Attorney General Andrew Cuomo, City Council Speaker Christine Quinn, City Council member John Liu, City Comptroller William Thompson and Representative Anthony Weiner.

Councilman Liu told the NY Times that he last spoke to Hsu "a few months ago at a gathering of Asian-American Clinton supporters": "He actually told me he doesn’t get involved in municipal elections the first time I met him, but then he went ahead and gave to my campaign, and others." Hsu had also donated money to Senator John Kerry's 2004 presidential campaign and the New School. The New School president, former Senator Bob Kerrey, said, "So much of the university is about the immigrant culture, and I liked his personal story, coming from China, and he had an interest in fashion as well. It all intrigued me.”

The LA Times has an article about the mystery surrounding Hsu.