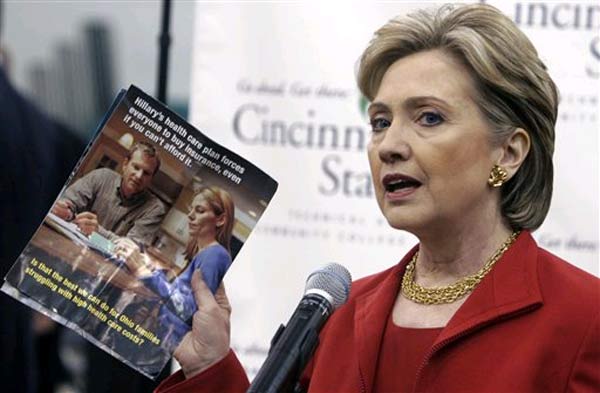 A Hillary Clinton campaign stop in Cincinnati became an opportunity for her to blast Barack Obama over what she called "blatantly false" campaign literature. Clinton said, "Shame on you, Barack Obama," as she held the literature in question. “It is time you ran a campaign consistent with your messages in public. That’s what I expect from you. Meet me in Ohio. Let’s have a debate about your tactics and your behavior in this campaign.”

The Obama campaign literature notes a Newsday article which suggests Clinton believes NAFTA was a "boon" to the economy; the Times reports Newsday editors didn't correct the article as the Clinton camp claimed but did say "Obama’s use of the citation in this way does strike us as misleading." (Yesterday, Clinton said, "I am fighting to change NAFTA.) Another flyer claimed Clinton's health care plan would force people to buy insurance if they can't afford it. She also said, "Let's have a real campaign. Enough with the speeches and the big rallies and then using tactics that are right out of Karl Rove's playbook."

Obama denied the accusations, saying Clinton's anger was "tactical", "The notion that somehow we're engaging in nefarious tactics I think is pretty hard." The two candidates will debate in Cleveland on Tuesday. And during last night's (this morning's?) Saturday Night Live Weekend Update, Tina Fey had a segment about bitches and mentioned the senator from New York's presidential campaign:

A Washington Post-ABC News poll is saying Clinton and Obama are dead even in Texas, Clinton leads by 7 points in Ohio. Clinton needs a more resounding majority in both Texas and Ohio to win the number of delegates she needs. And as far as Frank Rich is concerned, the Clinton campaign is "The Audacity of Hopelessness."