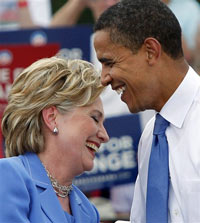 Barack Obama and his erstwhile Democratic opponent Hillary Clinton will be in New York City this week to host three fundraisers, with the joint purposes of getting Obama elected President and paying off Clinton's campaign debts. Get out those checkbooks because both will be pricey endeavors.

Two of the fundraisers will be held on Wednesday night. One will raise funds for the general election and the other will be to pay down Clinton's debts. It's widely viewed that Clinton finally ended her dead horse campaign after the Senators agreed to trade her political support for help in paying off approximately $10 million in loans she made to herself. The third fundraiser will be dedicated to Obama's campaign and will consist of Hillary supporters donating to the expected Democratic nominee.

The in-person fundraisers will be a throwback to traditional politics for Obama, who has raised enormous sums thus far via online contributions. The candidate recently declined to accept approximately $80 million in public financing of his campaign, in order not to be limited in other fundraising ventures.

Photo from the Associated Press