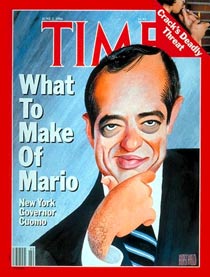 Over the weekend, the Boston Globe published an opinion piece by former governor Mario Cuomo. He said to avoid "a Democratic disaster in November," Hillary Clinton and Barack Obama should put aside their bitter rivalry and form a ticket together, so their supporters will be relatively happier (and less divisive). Otherwise, "the 2008 primary may be the story of a painfully botched grand opportunity to return our nation to the upward path, and leave us mired in Iraq and government mediocrity."

Naturally, neither campaign is very interested. Obama's spokeswoman said, "It is too early and too presumptuous to focus on the vice presidential selection." And Clinton's campaign said, "Discussions like this are premature because this is an historic campaign, and Democrats are more energized than ever, and there are millions of voices yet to be heard...Unlike the Obama campaign, we think everyone's vote should count, and we shouldn't end the race until [everyone] has had a chance to vote."

And, naturally, Cuomo is disappointed by their reactions.

#barack obama
#election 2008
#hillary clinton
#mario cuomo
#Politics
Do you know the scoop? Comment below or Send us a Tip
A new Gothamist is coming! We’ve moved comments over to our beta site. Click here to join the conversation and get a preview of our new website.