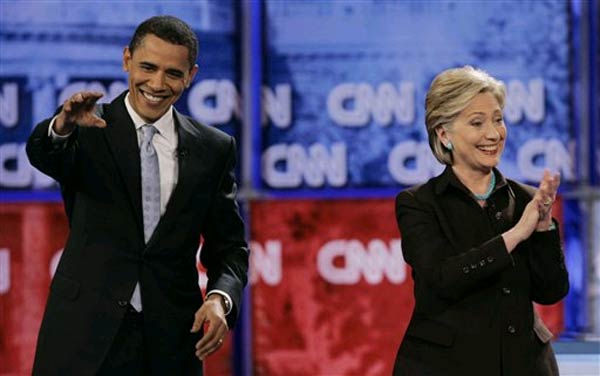 Yesterday, the Daily News and Newsday offered editorials endorsing Hillary Clinton for Tuesday's NY State Democratic Primary. While the News calls both Clinton and Barack Obama are "compelling choices," disagrees with both candidates' strategies for ending the war in Iraq and finds Obama inspirational, the News ultimately finds Clinton to be the "stronger" of the two, because of her experience. There are concerns about Bill Clinton's recent involvement - and potential involvement if his wife is elected:

Based on her experience and her service on behalf of New York, The News backs Hillary Clinton in the full expectation that from here on out she and her husband will abide by standards of fairness - and, more important, that she intends to draw firm, clear lines should she make it to the White House.

Newsday also chooses Clinton for her experience, citing her "hard work, smarts, bipartisanship, pragmatism and bulldog determination" which "are important for the next president." But Newsday adds, "Clinton could do with a bit of Obama's spirit in that regard. He has taught us that hope matters and that many in the nation are eager for leaders who will let them share in the movement for change."

This comes days after the NY Post endorsed Barack Obama for the Democratic primary. For the Post, the important thing is that he's "not Team Clinton. That counts for a very great deal."

Don't forget the Clintons' trademark political cynicism. How else to explain Sen. Clinton's oft-contradictory policy stands: She voted for the war in Iraq, but now says it was a bad idea. She'd end it yesterday - but refuses to say how.

It's called "triangulation" - the Clintonian tactic by which the ends are played against the middle.

Once, it was effective - almost brilliant. Today, it is tired and tattered - and it reeks of cynicism and opportunism.

As for the Republican primary, John McCain has been endorsed by the NY Times, NY Post and Newsday (doesn't seem like the Daily News has a Republican endorsement yet). It'll be interesting to see what happens on Tuesday - who are you voting for?