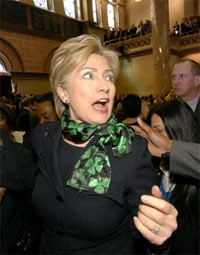 Add another high-profile politician to the list of people who don't want to run for governor: Senator Hillary Clinton's spokesman Howard Wolfson tells the NY Times rumors of a gubernatorial future are "ridiculous...There are no circumstances under which Senator Clinton will run for governor."

Last month, Newsweek reported some Democrats were "floating a consolation prize"--being Governor of NY--to Clinton. Add to that the possibility of Rudy Giuliani running and you've got grade-A wishful thinking!

While Clinton probably won't run for governor, given how well-liked and well-meaning Paterson seems to be (for now), the Times make an important observation: "New Yorkers have always preferred their politicians to be larger than life — one factor, arguably, in their openness to making Mrs. Clinton a senator in 2000 despite her shallow roots in the state." That may also have been why Eliot Spitzer won so big--he was loud, bombastic and talked a big game.

Politico's Roger Simon thinks Clinton's whiskey-drinking was more important to her campaign than shaming Barack Obama for being elitist.