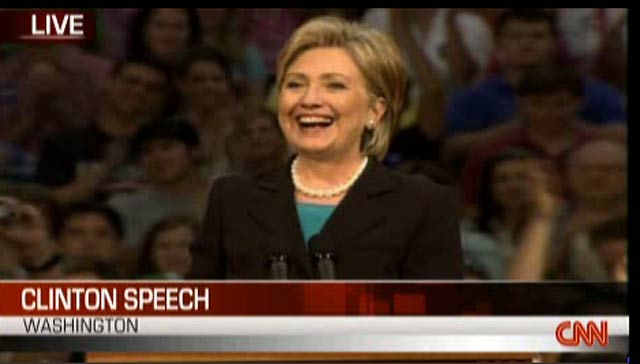 Like the last party guest who lingers long after her welcome and leaves the hosts feeling a little awkward and anxious for her departure, Hillary Clinton finally conceded that she is not going to get the nomination of the Democratic Party in the 2008 Presidential election. In a fairly upbeat address at the National Buildings Museum in Washington, DC, Clinton pledged to work to unite Democrats after a long and bitter campaign.

Senators Clinton and Obama met secretly yesterday at the DC home of Sen. Dianne Feinstein to mend fences and discuss what Clinton's role will be for the duration of the election. Many Clinton supporters have become extremely alienated from the Obama camp in the Democratic Party. In today's address, Clinton "suspended" her campaign, fully endorsed Obama, and said that everyone who has worked to support her, should work to make him the next President of the United States. The mantra of the speech, repeated countless times, was "That is why we must work to elect Barack Obama our President!"

One of the things that may have been discussed at Feinstein's house is the possibility that Clinton will urge her supporters to back Obama in the race against Sen. John McCain. In return, Obama's campaign organization may help Clinton pay off her approximately $20 million in outstanding campaign debts, millions of which are payable to the Clintons themselves.

#2008
#clinton
#concession
#democratic
#hillary
#nomination
#obama
#politics
#Senator
#speech
Do you know the scoop? Comment below or Send us a Tip