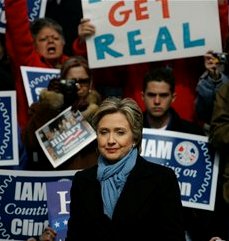 In an echo of its 2006 article about her Senate re-election campaign spending, the NY Times finds Hillary Clinton donors are concerned over her campaign's spending. Some of the line items that emerged after her campaign finance report was published: $100,000 in party platters and shovels for Iowa caucus parties (where Clinton placed third - and where it did not snow), $25,000 in hotel rooms at Las Vegas' Bellagio, $275,000 to a South Carolina firm "that was supposed to turn out black voters for her" (Barack Obama won SC by almost 30%) and $267,000 for adviser Howard Wolfson's January fee.

Joe Trippi, veteran of Howard Dean's 2004 campaign and an adviser to John Edwards, tells the Times that Clinton erred by relying on few core donors to contribute the maximum amount, $4,600, which means she couldn't go back to them, whereas Obama has many donors making smaller contributions.

Trippi also observed, "Everything was the best. The most expensive draping at events. The biggest charter. It was like, ‘We’re going to show you how presidential we are by making our events look presidential.’...she ran a campaign like they were staying at the Ritz-Carlton." Well, not exactly the Ritz - though they spent $5,000 at the Four Season in Las Vegas.

The Times has a graphic showing how money is spent by Clinton, Obama, John McCain and Mike Huckabee - and how much they have on hand; Obama has $10 million more than Clinton for the rest of the primaries. And Democratic strategist Hank Sheinkopf says, "It’s easy to be critical, but had she won Iowa, none of this would have mattered. It wouldn’t have mattered what she spent because money would have come pouring in."