Clinton and Obama Have Their 20th Debate 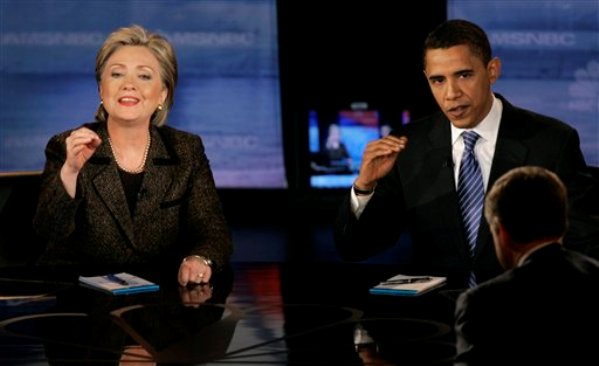 Senator Hillary Clinton and Barack Obama faced off for the 20th time last night in Cleveland, Ohio, as they head towards the big March 4 primaries next week. The rivals for the Democratic presidential nomination "traded insults," as they accused each other of negative attacks regarding their health care policies.

The NY Times described Clinton as "relentless" - insisting on "responding to virtually every point that he made — often interrupting the debate moderators, Brian Williams and Tim Russert of NBC, as they tried to move on." Which made sense, as she must win the Ohio and Texas primaries by big margins to stay competitive with Obama, who not only leads in the delegate count but in the national polls as well.

The candidates discussed pulling out of NAFTA (which Ohio's working class does not like), as well as their views on Iraq (Clinton said they were the same, but Obama criticized Clinton's decision to "give in to George Bush"). Clinton also denied any knowledge of a Clinton staffer allegedly distributing the photograph of Obama in Somali clothing during a trip to Africa, which Obama accepted, "I take Sen. Clinton at her word that she knew nothing about the photo. So I think that's something we can set aside."

You can watch the debate here or read a transcript. And Clinton referenced Saturday Night Live. No, not Tina Fey's "Bitches get things done" segment, but how the media seems to be giving Obama a free ride. Clinton remarked that she has answered the first question in most debates.