Dangerous weather patterns resulting from global warming are rapidly turning NYC into a hot sticky wet hellhole, according to a group of scientists assembled by the Bloomberg administration. You can peruse the full overview of their dire report here on the mayor's office Flickr, but the takeaway is alarming: by 2050, scientists predict NYC summers will be on par with Birmingham, Alabama, with an estimated 57 days a year above 90 degrees. For the past three decades, NYC has averaged 18 days a year at or above 90 degrees.

Heat waves are a significantly greater cause of death than any other natural disaster, but if the New York City Panel on Climate Change proves correct, more New Yorkers will also be at risk to flooding than previously anticipated. When the panel released its first study in 2009, it expected sea levels would rise by two to five inches by the 2020s. But in a sign of how rapidly the impact of climate change is unfolding, scientists now say sea levels will rise four to eight inches by 2020, and possibly as high as 11 inches.

Rainfall is also expected to increase 10%. Since the early '70s, NYC has averaged three days out of the year with 2 inches of rainfall or more. By 2020, scientists expect four days to exceed that amount of rain, on average. 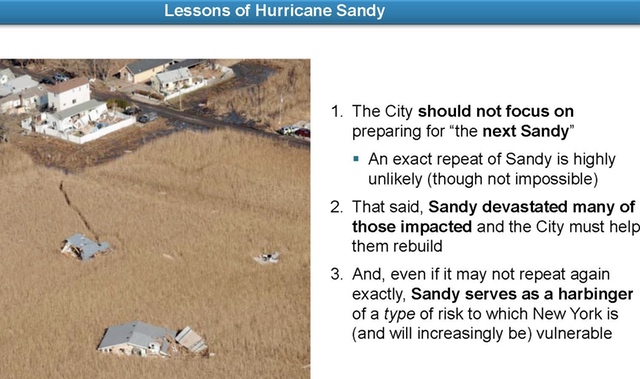 The dire new estimates project that more than 800,000 NYC residents will live in the 100-year flood plain by the 2050s, compared to the 398,000 currently in the zone. "When they've looked at what the potential storm surge for a so-called 100-year flood could be, the height of that 100-year flood could be five to six feet higher than Sandy in the out-years," said Seth Pinsky of the New York City Economic Development Corporation.

This afternoon Mayor Bloomberg will announce plans to prepare the NYC for the increased nastiness to come. Sources tell NY1 that Bloomberg's plans will include dunes in the Rockaways, a storm gate at Newtown Creek and man-made ways to break waves off Staten Island's South Shore.

#climate change
#global warming
#mayor bloomberg
#PlaNYC
#science
#weather
Do you know the scoop? Comment below or Send us a Tip