Climate Change Might Be Messing Up Snowflakes As We Know Them, But You Can Help

A snowflake covered with rime, little pellets of ice. Lots of rime is known as graupel or soft hail. (Courtesy Kenneth Libbrecht, snowcrystals.com)

As another erratic winter draws to a close, it’s time to consider a lesser-known possible effect of climate change: misshapen snowflakes.

Last winter, WNYC first reported on the scientists at Columbia University’s Earth Institute who are studying how warmer winter air is changing the way snowflakes form, but rather than wallow in sadness and nostalgia, we spent the interim period developing a snowflake photography and snowpack measurement kit that anyone can use to help contribute to the research project. The scientists need way more data than they can conceivably collect on their own. That’s where you come in. Citizen scientists unite!

We partnered with two local high schools, Bronx Science and the New York Harbor School, to make sure our kit was, in fact, easy to use, and to offer the teachers a hands-on project to help students learn more about climate change.

“It works, it fits perfectly with what we’re talking about right now, and just how this might just be an indicator of some kind of climate shifting,” said Ed Wren, a science teacher at Bronx Science.

For those of you who missed the story last year, here’s the situation. As we can all attest, climate change is creating more fluctuating temperatures. Normally, snowflakes form high up in the atmosphere, and crystallize into their pretty structures as they pass through cold layers of air. But with warmer temperatures, snowflakes can partially melt on their way down. There’s more water in the air these days, and it acts like a glue that can glom onto the snowflakes, covering them with little ice pellets. Add in the wind and the snowflakes can smash together, turning into mega snowflakes. See for yourself: 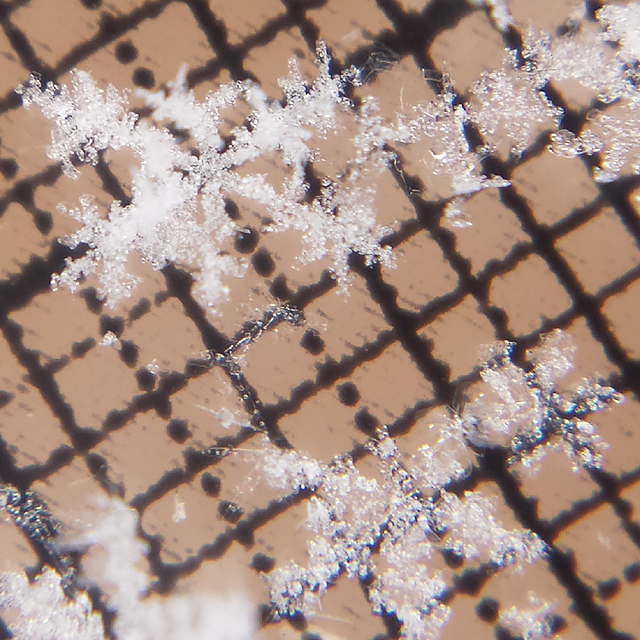 To add insult to injury, after these snowflakes land they melt faster because they’re less able to reflect light. This has serious implications for flooding and hydrology as well as spring vegetation. When melting occurs normally, the nutrients in the snowpack are absorbed into the soil. Not so when it melts away really fast.

The contents of our X-Snow Kit. The tools are very similar to the ones used by scientists to measure snow properties. (Clarisa Diaz, WNYC/Gothamist)

Our snowflake photography kit comes with everything you need to take your own pictures of snowflakes and measure the snowpack near you, including a microscope that attaches to your smartphone! (You also get a handsome red WNYC fanny pack!) Maybe you’ll be traveling to a frozen tundra soon? Maybe you’ll grab your kit now and practice photographing sugar crystals so you’ll be ready next winter? Heck, it may snow tomorrow. It’s hard to tell these days.

Despite the gravity of the situation, it’s actually really fun to photograph snowflakes. 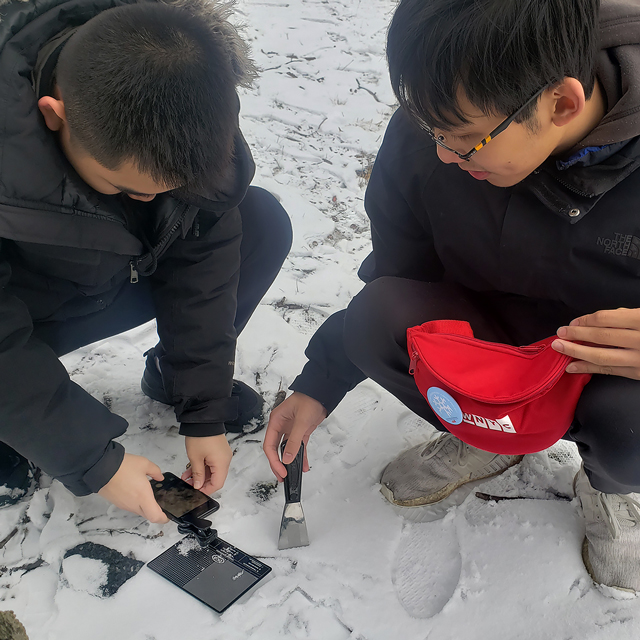 “It’s pretty fun, because we are an environmental science course, it’s more interactive,” said Lucy Jin, a senior at Bronx Science. Lucy’s classmate Ellen Ren added, “It really makes you aware of your environment. And to see it before our eyes, it’s even better.” 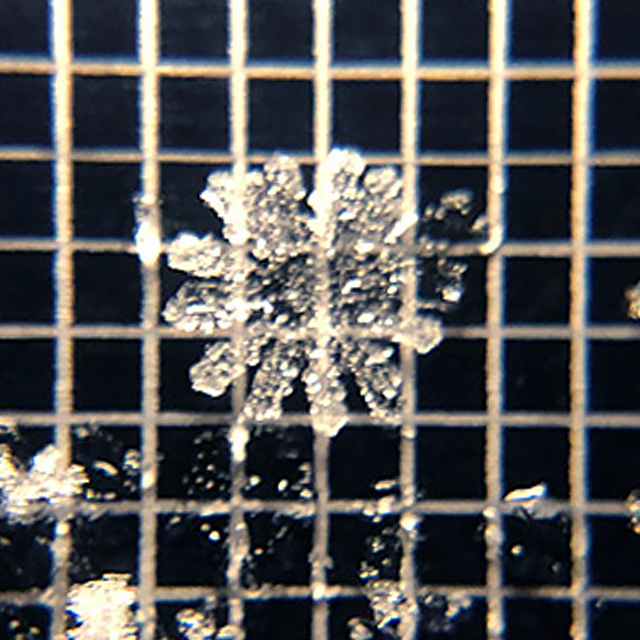 According to Dr. Jared Entin, a manager for the Terrestrial Hydrology program at NASA, scientists use satellite footage and drones to get a high-level view of snow, but they also need data about what’s happening on the ground.

“We need people out there taking all sorts of different observations,” he said. “What NASA is doing at this point is trying to move beyond just ‘Is snow on the ground or not?’ and start to answer deeper questions like ‘How much water is actually stored in the snowpack?’”

WNYC worked with Dr. Marco Tedesco, a polar scientist at the Lamont-Doherty Earth Observatory, and his team to design the kits and the training materials. For the past couple of years the team has been involved in several field experiments to look at snow properties in the New York region. 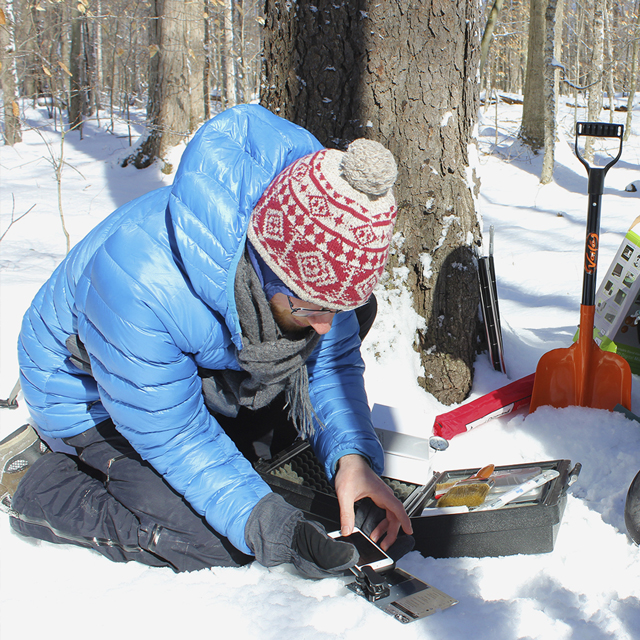 We made a website with Columbia that includes how-to videos and instructions for contributing your photos and data to the project. You can purchase your kit here.

Now get out there and contribute to science! 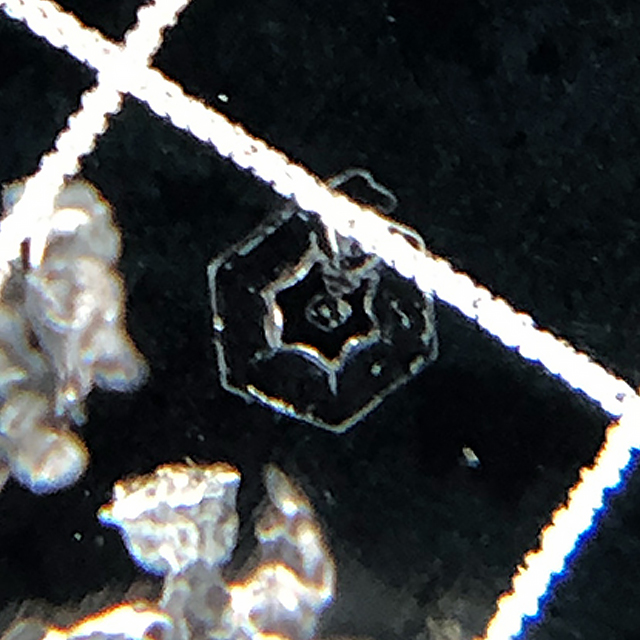 For more on this project, listen to reporter Clarisa Diaz’s segment on WNYC:

Clarisa Diaz is a designer and reporter for WNYC / Gothamist. You can follow her on Twitter @Clarii_D.

#climate change
#snowflakes
#original
Do you know the scoop? Comment below or Send us a Tip