Clemens Admits Some "Flaws" and "Mistakes" 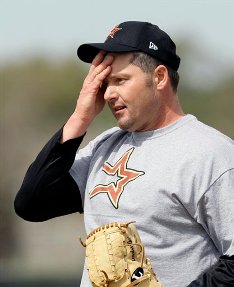 Roger Clemens issued another statement, in the wake of McCready-gate, admitting some mistakes but denying his affair with country singer Mindy McCready started when she was 15. Clemens told the Houston Chronicle:

"I know that many people want to know what I have to say about the recent articles in the media. Even though these articles contain many false accusations and mistakes, I need to say that I have made mistakes in my personal life for which I am sorry. I have apologized to my family and apologize to my fans. Like everyone, I have flaws. I have sometimes made choices which have not been right."

However, Clemens categorically denies that his relationship with McCready started when she was 15, "Nothing could be further from the truth. This relationship has been twisted and distorted far beyond reality." Where that puts McCready's tacit confirmation that the initial Daily News story saying as much, who knows, but Clemens also made sure to add these admissions of wrongdoing do not include HGH use.

Clemens' misdeeds are coming to light because of his defamation suit against former trainer Brian McNamee, who said the pitching ace used steroids. McNamee's lawyer Richard Emery says the player's less-than-squeaky clean behavior will take center stage if the suit isn't dropped, "As we say in my business, it'll be a s--- show."

And another source told the Daily News that Clemens "had chicks stashed in every city - like every athlete, you play golf, you go get drunk and [have sex]. In some ways, it's a lonely life."