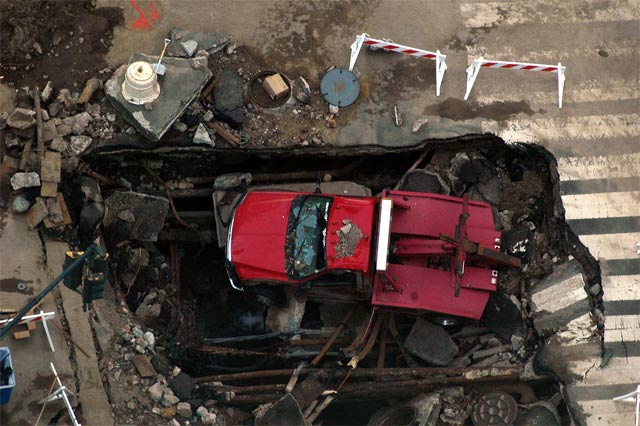 The red tow truck sitting in a crater at 41st Street and Lexington Avenue, right where an 83-year-old steam pipe exploded Wednesday evening, will be towed out today. The Daily News reports that Con Ed is preparing to remove the truck, and because there are live electrical cables in the hole, the "crews may use nylon wire, which won't act as a conductor, to hoist the vehicle from the pit." After the truck is removed, the utility will be better able to investigate what may have caused the explosion that killed one and injured many others.

The News also has details about the passenger in the tow truck. Thirty-year-old Judith Bailey's car had broken down in the Bronx, so tow truck driver Gregory McCullough picked her up and had been driving her back to Brooklyn. Bailey, a therapist for the mentally disabled, suffered burns over 30% of her body and is still at Weill Cornell's burn unit, where McCullough remains in a medically induced coma. Her 6- and 9-year-old daughters have not been told of their mother's injuries.

Many businesses are worried about their losses, since the city has required them to stay closed during the area's clean-up. Con Ed will pay for damage such as sidewalk and building repairs as well as contaminated clothing, but the NY Times reports "Con Ed has not indicated whether it will reimburse businesses for financial losses caused by the closing of the 'frozen zone' around the explosion site," because it's not bound to reimbursing due to steam incidents.

Mayor Bloomberg acknowledged that some businesses will be closed and may be hurt economically since they have to wait; he said, "But you know, you've got to be safe no matter what the costs are." The city's Small Business Services Department will offer interest-free $10,000 loans. Lawyers, on the other hand, are expecting many lawsuits and say that people should keep their contaminated clothing as evidence for a potential lawsuit.