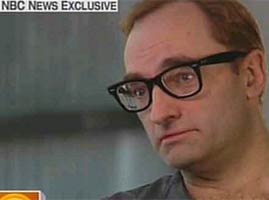 The man who calls himself Clark Rockefeller gave a jailhouse interview with the Today Show and did not admit to not being part of the famous clan, "I really couldn't tell you. Perhaps at some point we can do a DNA test and find out." But he does claim he grew up in NYC!

Rockefeller, believed to be a German national named Christian Gerhartsreiter, gained infamy last month when he kidnapped his daughter during a social worker-supervised visit (his ex-wife had custody). After enlisting someone to drive him and daughter Reigh to NYC's Grand Central Terminal, he hid away till the authorities finally found in him Baltimore. It's suspected Rockefeller may have used a different name while living in California--and may be linked to the disappearance and death of a California couple--while other reports say that he used the "Son of Sam"'s Social Security to get his stock broker's license.

In the interview, he said, "I'm quite sure I grew up in New York City... There are certain things that I haven't forgotten. I remember going to the zoo in Central Park when it wasn't what it is today. When it was actually a downright dangerous place to go." Rockefeller said his wife Sandra Boss knew he really wasn't a Rockefeller:

She wanted to keep the appearance of it going. For her, it was much - for keeping appearances....She is the youngest woman ever to be elected to director of McKinsey & Company. And, many of her colleagues, who were friendly with me, believed it had a lot to do with me and my name... Between the two of us, I don't think it ever came up specifically as to, like, you know, let's look up in the family tree. But she knew early on that I had virtually not much in common with the Rockefeller family.

Rockefeller, though, will admit to one thing: Missing his 7-year-old daughter desperately. He was the child's primary caregiver and said, "I miss her unbelievably much. I cannot even begin to tell you just how much I miss her... And not being with her, not seeing her, not holding her is very, very, very difficult."

#Clark Rockefeller
#Crockefeller
#identities
#mystery
Do you know the scoop? Comment below or Send us a Tip