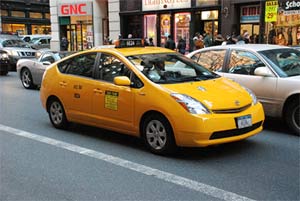 As the AP puts it, this means "taxi fleet owners, who must replace their cabs every three to five years, will probably be forced to buy fuel-efficient hybrids, which run partly on electricity." The Taxicab Board of Trade isn't happy about that, noting that the old Crown Victoria's safety rating is higher than the Ford Escape (one of the hybrid models being used as a taxi now). The board's Joseph Giannetto told the Sun, "We don't know much about the safety or durability of these hybrid taxis. A New York taxi is on the road perhaps more than any other vehicle in the world and demands more attention of safety and durability."

Earlier this year, Mayor Bloomberg announced that more and more hybrid taxis would be rolled out, increasing the percentage of hybrid vehicles to 30% of the fleet by October 2009 and hitting 100% by October 2012. It was just two years ago that the TLC gave the okay to introduce hybrids into the taxi mix - for extra fun, check out this 2005 PDF cost/benefit comparison of hybrids from the TLC. These days, there's a luxury Lexus hybrid taxi somewhere, too.

Photograph of a Prius taxi by Triborough on Flickr