City's Syphilis Cases on the Rise 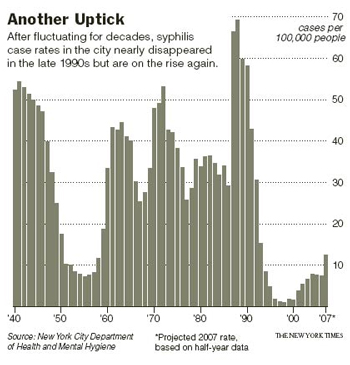 New York's Department of Health and Mental Hygiene is reporting that there has been an alarming resurgence in the reported number of cases of syphilis in the city. The New York Times writes that after spiking in the late 1980s during a wave of unsafe sex fueled by an epidemic of crack cocaine use, cases of syphilis dropped steadily. By the late 1990s, incidences of the disease became so rare that public health officials at that time were planning on describing it as eradicated by 2005. Unfortunately, cases of syphilis are on the rise and the number of reported patients with the disease is projected to reach its highest level in 2007 in over a decade.

Syphilis is a sexually transmitted disease that can be transmitted easily through oral sex. An initial sign of infection is a small lesion at the site of infection, but the sore soon heals and the disease can remain undetected for some time, even as it destroys the body's internal organs, including the brain. There is little hard data to back it up, but some researchers believe the resurgence in syphilis is attributable to the use of methamphetamines, which can cause hypersexuality and lead to unsafe sex with multiple partners. The recent upsurge in syphilis cases has been centered among gay men in Manhattan. There has also been an increase in cases among women, who may be having sex with men who are also having sex with other men.

When detected, syphilis is treatable with common antibiotics. Health officials fear, however, that the rise in the disease is a bellweather for an upcoming sharp increase in HIV infections. The health department is currently urging widespread screening for syphilis and began distributing free condoms around the city in February. It is also running a program where infected patients can have their sexual partners confidentially notified that they may have been exposed to the disease.

#cocaine
#crack
#gay
#health
#hiv
#manhattan
#Mental Hygiene
#new york
#new york times
#News: NYC
#running
#sex
#the city
#The New York
#the new york times
Do you know the scoop? Comment below or Send us a Tip
A new Gothamist is coming! We’ve moved comments over to our beta site. Click here to join the conversation and get a preview of our new website.