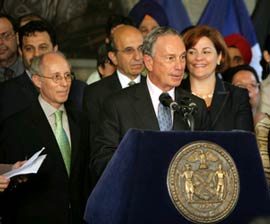 Kids returning to school Tuesday were handed pamphlets outlining Mayor Bloomberg's new "Respect for All" policy, intended to reduce bullying, particularly harassment in public schools based on ethnicity, national origin, religion, gender, sexual orientation or disability. Every principal is now required to designate a staff member to whom students can report incidents, with schools required to report complaints to the Department of Education within 24 hours. According to WNBC, an accounting of all the incidents will be put online at the end of each school year, thereby sharing the humiliation with the world wide web.

A similar policy was recently passed in the New York State Assembly (but not Senate). The city's anti-bully initiative was prompted in part by bias incidents targeting Sikh students; last year, a student tried to remove a Sikh schoolmate's turban and punched him in the face. Members of several advocacy groups attended the mayor's news conference yesterday and applauded the new rules.

But the Post finds it peculiar that Bloomberg would enact the regulations after vetoing an anti-bullying bill passed by the City Council four years ago. The mayor explained yesterday that the council had overstepped its bounds and interfered with "the job of the chancellor." The new policy also requires investigation into "electronically transmitted acts" on cellphones or via the Internet. "Simply put, there is just no place for prejudice or hate or bullying in our schools," Bloomberg told reporters. But keep your guard up, nerds; old standards like titty-twisters and atomic wedgies are not explicitly prohibited by the new policy.

#anti-bully
#bully
#law
#new york city
#nyc
#policy
#schools
Do you know the scoop? Comment below or Send us a Tip
A new Gothamist is coming! We’ve moved comments over to our beta site. Click here to join the conversation and get a preview of our new website.