Transportation Alternatives has been sounding the alarm on the Greenway's design since 2008, after a drunk driver drove on to the path and killed cyclist Edward Ng. Saipov allegedly entered at West Houston Street.

In the meantime, NYPD cruisers are serving as temporary barriers at crossings wide enough to accommodate a weaponized vehicle.

"As soon I could get out, I wanted to get back out [on the path]," she said. "It certainly is going through my mind as I ride down. And I'm looking behind me more often. In fact, I told my husband I am going to get a mirror for my bike or my helmet."

"I came off the 67th Street entrance, and I noticed they were putting up the big cement NYPD blocks," Priest added. "That made me feel good immediately, that there was an instant [change]. As far as long term, I really like the small posts... where you can still cycle through." 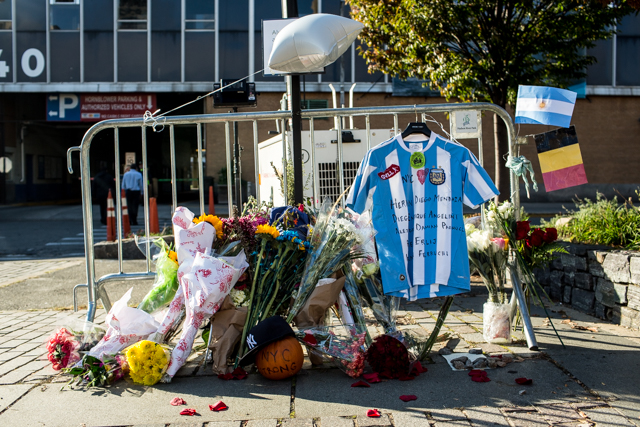 A memorial on the Greenway in Tribeca, near the spot where eight people were killed. (Scott Heins / Gothamist)

Deborah Rennard, 57, brought a bouquet to a new memorial at the intersection of Houston Street and the Greenway in Tribeca around 3 p.m. Her son went to high school with one of the victims, 23-year-old Nicholas Cleves.

"On the one hand you're just in shock and horrified and on the other, unfortunately, it's become such an ordinary occurrence that you're almost like, okay, this is the world we live in, you know?" Rennard told Gothamist. "These acts of aggression and terrorism have become so commonplace that you almost become impervious in your reaction."

Mario Arana, 61, stopped at the memorial on his way home from work on Thursday. He lives in Chelsea, and commutes to his cooking job in Tribeca. "This is my route every single day for fifteen years," he said. "I bike every single day."

On the day of the attack, Arana left work five minutes after Saipov allegedly careened down the path.

"I've been very scared and insecure because, I don't know, especially in this area, it's very open and you never know who is behind, especially early in the morning," he said. "When something happens, they want to fix everything. But what about before? They wait for something to happen."

#terror attack
#west side highway
#original
Do you know the scoop? Comment below or Send us a Tip