A controversial plan to alleviate overcrowding and increase diversity at two of Manhattan's most coveted elementary schools—PS 199 on West 70th Street and PS 452 on West 77th Street—will go into effect next school year. The Department of Education hopes the plan will also bring new families to PS 191, a school that has historically struggled on state tests and recently shook a contested "persistently dangerous" ranking.

A 2015 plan to draw more families to PS 191, which primarily serves the NYCHA-run Amsterdam Houses on 61st Street, failed a year ago in the face of strong opposition. And much of that opposition carried over. Tuesday's vote of 9-1—made by the District 3 Community Education Council (CEC), a small group of appointed district parents—approved changes many Upper West Side parents have adamantly protested for months.

"We can say over and over again that we are only acting in the interest of our own kids, and that's how we should make our decisions," said Kim Watkins, a member of the CEC. "And we all want the best for our kids. But when our self interests... mete harm on others, we have to reconsider how we make our decisions."

The plan calls for moving PS 452 sixteen blocks south to the current PS 191 building—a larger campus—lengthening commute times for many families. Two of the buildings in the sprawling Lincoln Towers co-op community will move from PS 199—ranked one of the nation's top schools in 2013—to PS 191. PS 191, in turn, will move to a new campus at the nearby Riverside Center, a luxury residential high-rise. Future kindergarteners from the Amsterdam Houses will be zoned across all three schools.

Over the summer, PS 452 families came out in force, opposing the proposed shakeup to their walk-to-school routine. Some said they would sooner pull their children from the public school system than follow their principal downtown. "You vastly underestimated the massive life and financial choices we made to attend this school," one parent told the DOE in June.

To appease those parents, the DOE this week promised to provide school bus service between the West 70s and 61st Street.

Some members of the CEC argued Tuesday that UWS parents' opposition to the rezoning was effectively a vote in favor of segregation. About two thirds of the student body is white at both PS 452 and PS 199, and only about 10% of students at these schools qualify for free lunch. At PS 191, black and Latino students make up 81% of the student body, and 73% of students qualify for free lunch.

"The children of the Amsterdam Houses have suffered from a blind eye turned towards them for decades," Watkins said. "No one in this room is responsible for segregating our schools, but we can no longer claim that we are not perpetrating this harm on children living in that part of our district." 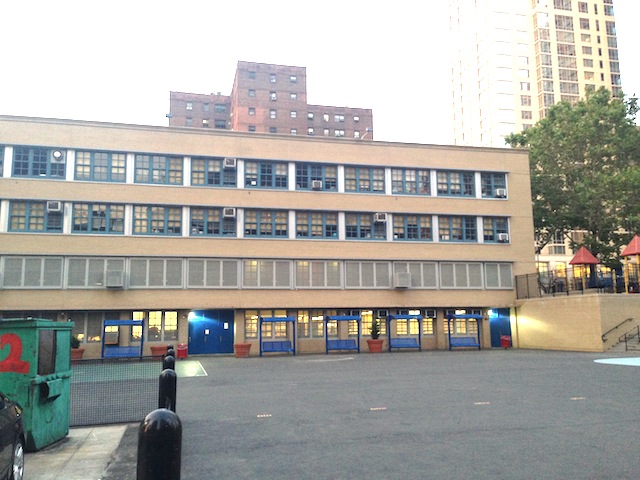 The playground at PS 191. The Amsterdam Houses are visible in the background (Emma Whitford / Gothamist).

Others argued that the CEC can't expect to solve the segregation problem in Upper Manhattan's public schools in one fell swoop. A recent analysis from the New School shows that Manhattan's District 3 is one of the most segregated districts in a city recognized nationally for its school segregation. The plan approved Tuesday only impacts schools in the southern part of the district—excluding Harlem between 110th Street and 124th Street, where students are predominantly black and Latino and from low-income families. In Harlem, overcrowding is not the issue. Instead schools grapple with under-enrollment, a lack of resources, and the encroachment of charter schools.

Earlier this month the DOE presented a plan to consolidate two Harlem schools. PS 241 on West 113th Street, which currently shares its building with a Success Academy charter school, would move into the PS 76 building on West 121st Street. But PS 241 parents argued that the plan had been sprung with little warning, even as UWS parents entered their 18th month of debate over their own school rezoning drama.

The Harlem plan was tabled this week—leaving more time for community engagement in the northern part of the district, but also solidifying a disconnect between Harlem schools and the more affluent school zones to the south.

"We don't want to just trash failing schools," testified Ricardo Aguirre, a spokesman for Harlem City Council member Inez Dickens. "It's easy to label them, but what have we done to find the resources to fix them?" 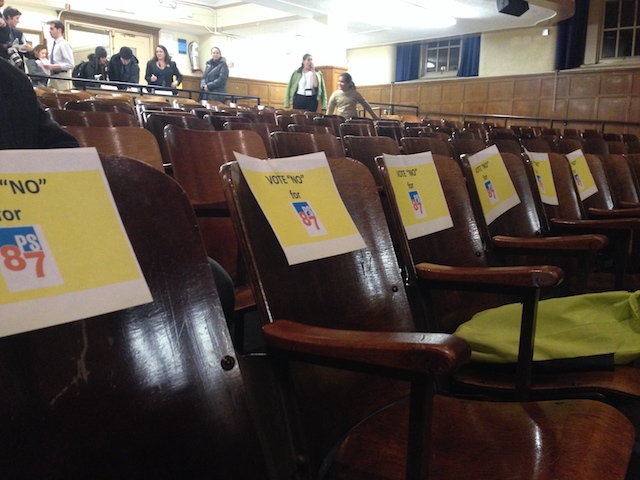 The effectiveness of the newly-approved UWS zones will be contingent on some parents' willingness to participate—to send their children to a new campus, or enroll their children in a school with lower tests scores.

Many parents have expressed optimism. "[PS] 452 is the luckiest thing that ever happened to my family," parent Heather Tait testified earlier this month. "I would follow [it] to the moon."

But others said that the city was expecting too much. A large contingent of parents from PS 87 on West 78th Street brought "Vote No" signs Tuesday.

PS 87 is, like PS 452 and PS 199, high-performing, popular and crowded. Parents said that they feared an influx of applications—both from families drawn into the new PS 87 zone, and those unwilling to make the trek downtown. The whole plan, they argued, is contingent on high enrollment at schools less appealing to parents than their own.

"This is assuming that schools that people have never gone to before, and never heard of, are going to be immediately popular," said PS 87 parent Wendy Lamont Flagstad.

The DOE has pledged that it won't condone long-term overcrowding at PS 87. But Superintendent Ilene Altschul said Tuesday that the school might be overcrowded in the short term "depending how many families move with 452."

CEC Member Noah Gotbaum, Tuesday's single dissenting vote, testified that the rezoning had been effectively approved weeks ago, and that the process had been a sham. A strong opponent of the PS 452 move, he received hearty applause from parents who are still staunchly anti-rezoning. Some have accused the DOE of failing to provide accurate data throughout the process.

Gary Ramsay, a Lincoln Towers resident whose children will be rezoned out of PS 199, alluded to a possible lawsuit over what he described as the CEC's lack of transparency. Many of his neighbors are angry that future luxury towers fall within the PS 199 zone.

"We still don't understand why this needs to happen now. It doesn't make sense," he said.

"We know they [the CEC] are going to vote one way," he added. "But this is not over by any stretch of the imagination."

#integration
#overcrowding
#School Rezoning
#Upper West Side
#original
Do you know the scoop? Comment below or Send us a Tip