A new legislative initiative launched Sunday afternoon will guarantee legal representation for low-income tenants in Housing Court, a major development in housing policy in a city where roughly 90 percent of tenants currently appear in court without an attorney.

Speaking at Edward A. Reynolds West Side High School on the Upper West Side, Mayor Bill de Blasio and City Council Speaker Melissa Mark-Viverito announced that the city would be devoting an extra $90 million annually to fund the new policy.

"We are the biggest city in the country to level the playing field between tenants and landlords in housing court. To anyone being forced out of their home or neighborhood, we are fighting for you. This is still your city," Mayor Bill de Blasio said.

The announcement comes several months after Council Member Mark Levine and Council Member Vanessa Gibson introduced right-to-counsel legislation, which proposed providing representation to tenants with incomes under 200 percent of the federal poverty line. The policy announced today uses the same means test, which works out to 50,000 a year for a family of four.

"We have brought about a game changer for tenants in New York City, who will not have to face eviction proceedings alone anymore," said Levine, who worked on the legislation for several years.

A study released last spring by the New York City Bar Association found that such a requirement would cover around 80 percent of all cases in housing court—approximately 130,000 cases a year. 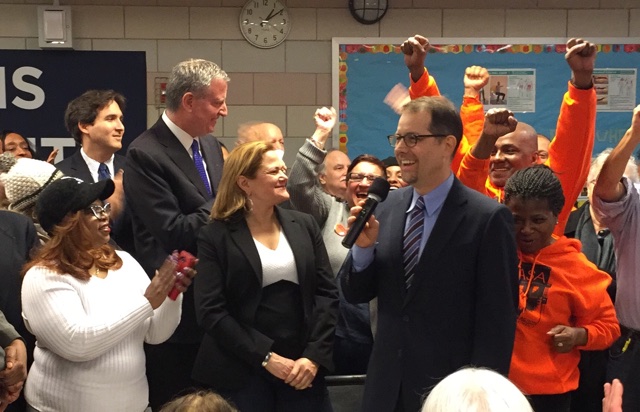 Housing advocates have long pushed for right-to-counsel legislation, pointing to data that shows legal representation significantly increases the chances a tenant can avoid eviction. In recent years, the city has spent tens of millions of dollars to expand legal services for tenants. In the spring of 2016, tenants rights group Housing Court Answers reported that during the previous year, evictions had fallen to their lowest level in a decade, a shift that many credited to the increase in funding.

With the city in the midst of an affordable housing crisis and homelessness at or near an all-time-high, the hope is that the new policy will help low-income tenants, who can find themselves unable to find an affordable apartment if they are evicted from theirs, avoid homelessness.

"I am extremely thankful for the commitment to fully fund Right to Counsel, equipping tenants with legal representation in eviction proceedings," said Gibson. "Affordable housing and access to a lawyer is a fundamental right that I truly believe invests in our families, keeps them in their homes and prevents homelessness.

Funding for the program, which adds to the $60 million the city currently commits to counsel for tenants a year, will be phased in over several years. It will be an additional $15 million in 2018 and will rise to an additional $93 million—putting total funding levels around $150 million—in 2022. Tenants who earn above the means-test level will be eligible for free legal counseling.

In a statement to Gothamist, Joseph Strasburg, president of the Rent Stabilization Association, a landlords' group, criticized the new proposal as failing to address the underlying issue that causes evictions: failure to pay rent. “We think this is a good concept and a positive step forward, but unfortunately it will serve only to delay the inevitable since the majority of eviction cases involve tenants’ inability to pay rent," he said.

He added that the proposal would threaten landlords of rent stabilized buildings. "This proposal places the burden of rectifying de Blasio’s miserable failure to address the homeless crisis squarely on the shoulders of the largest providers of affordable housing—landlords of 1 million rent-stabilized apartments in the five boroughs."