City Will Do "Everything Possible" To Protect NYers

After the apparent suicide bombings in two Moscow subway stations that left 39 dead yesterday, the NYPD increased its presence at subway station around the city. Mayor Bloomberg condemned the attacks, "The New York City Police Department stepped up its patrol of the subways. We will learn from the terrible tragedy in Moscow, as we do from every terrorist incident around the world, and we will continue to do everything possible to protect our transit system - and our entire City - from the threat of terrorism." 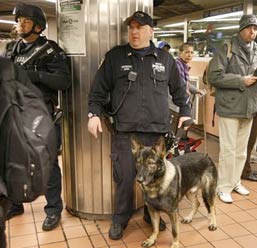 Commuters saw some police officers with machine guns, others with bomb-sniffing dogs. One man told the Daily News, "I am scared, of course. You don't know who is the next bomber," while one woman was frustrated, telling the Post, "I think it's excessive. It's Easter this week, and you have families with young kids on the subway, and I'm sure cops with machine guns would scare them." But another rider said, "Better overkill than under-response. If the terrorists see an under-response, they may think we are vulnerable."

Well, speaking of under-response, Bloomberg said, "There are an awful lot of our security people who are undercover and, so, if you go to a station and say, 'There's nobody here' that may very well not be true," he said. "There's a good chance that somebody might be there, you just don't recognize them as police officers."

The NY Times reports that Russian "authorities offered no new information on Tuesday on the search for the organizers of the attacks, carried out by two women, but they said they continued to suspect Muslim extremists in the Caucasus region of southern Russia, which includes Chechnya." President Vladimir Putin said those who organized the bombings needed to be "dragged out of the sewers into the broad daylight. And it will be done." (The Times also has a feature on the Russians' fear of/obsession with female suicide bombers.)

Russian authorities have apparently identified suspects through surveillance footage—hear that, MTA? The Moscow Metro was open and running today, but one rider said, "I feel the tension on the Metro. Nobody's smiling or laughing."

#moscow
#nypd
#operation torch
#safety
#security
#subway
#subway bombing
#terror threat
Do you know the scoop? Comment below or Send us a Tip