In an announcement made on Wednesday morning—less than 72 hours before the start of the L train slowdown—the city revealed plans to move ahead with bus priority on 14th Street between 3rd and 9th Avenues. The "experimental" pilot program will prohibit private through traffic in the corridor beginning in June, creating a center lane in each direction for bus and truck traffic to coincide with the arrival of Select Bus Service.

While local drivers will be permitted make pickups and drop-offs, they will "always need to turn right at the next possible location." Left turns are forbidden, and DOT says they intend to enforce the restrictions through automated cameras across 14th Street. 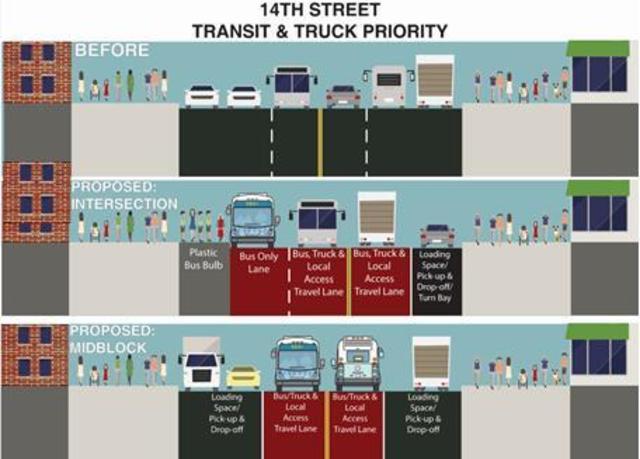 “We have an opportunity to try something new and really get bus riders moving on one of our busiest streets,” the mayor said in a statement. “As we continue to address congestion across New York City, this is an experiment that, if successful, could provide us another tool to move buses faster and save people valuable time for the things that matter.”

The city also announced that the new bike lanes on 12th and 13th streets in Manhattan, as well as Grand Street in Brooklyn, will be made permanent. Representatives of the Mayor's Office and Department of Transportation did not respond to Gothamist's inquiries about bringing HOV lanes to the Williamsburg Bridge, as was initially proposed.

The new 14th Street design comes months after the de Blasio administration scrapped plans for a busway, following Governor Andrew Cuomo's surprise L train intervention. A wide-ranging coalition of advocates have since warned that M14A and M14 D bus service, already among the slowest and busiest routes in the city, would be overwhelmed by displaced L train riders. Earlier this week, the MTA seemed to highlight the need for bus priority as well, noting in a tweet that the M14A/D would probably be the "best bet" for crosstown travelers at night and on the weekend, with buses running every 3-5 minutes.

In Manhattan, we’re adding bus service to help you get across 14th Street. If you use the L train between 8 Av and 1 Av, the M14A and M14D are your best bet. Combined, they will run every 3-5 minutes during the busiest times—much more frequent than the L. (2/6) pic.twitter.com/YEAEDhJmwv

Transit advocates said they were surprised and elated by the city's eleventh-hour reversal. The new vehicle restrictions will "mean buses can play a huge role in picking up the slack when the L train is down," said Tri-State Transportation Campaign Executive Director Nick Sifuentes. "This is a big win for commuters who were waiting with bated breath to see how we would manage to get around during the L train slowdown."

"Starting in June, riders will have a quick, reliable, subway-like [option] to get across Manhattan even while the L is under construction," echoed the Riders Alliance's Danny Pearlstein.

Meanwhile, some local West Village and Chelsea residents, who've long opposed transit improvements related to the L train repairs, are furious about the vehicle restrictions. They say the "busway" will increase traffic on side streets, while making it impossible for residents to access for-hire vehicles along 14th Street.

"It's a drastic, drastic change that's just uncalled for," Judy Pesin, co-chair of the 14th Street Coalition, told Gothamist. "The L train is not closing. It's open all day, yet they're dedicating 14th Street buses that have hardly any users...during most of the day, I personally don't see a lot of congestion."

The M14 buses currently carry about 27,000 riders daily, while consistently traveling at speeds below 4 miles per hour. Several bus riders have told Gothamist that it often takes them more than 30 minutes to travel across just a handful of avenues on 14th Street.

"That community has been ignored in the place of the commuters," Pesin added. "We're sorely disappointed that [the city] went ahead and did what they were going to do a year and a half ago without factoring in the needs of the community."