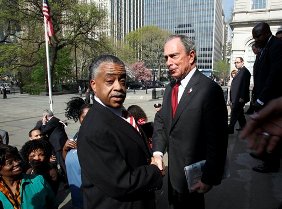 Tomorrow morning at 9 a.m., Judge Arthur Cooperman is expected to announce a verdict for the three police officers on trial for the shooting of Sean Bell.

Mayor Bloomberg said he's not worried about the reaction, telling reporters yesterday, “I think people in this city have come a long way from the time when people rushed into the streets and tried to tear apart society.” Bloomberg also made a point of speaking with the Reverend Al Sharpton and Bell's fiance Nicole Paultre Bell before Sharpton's press conference demanding a conviction.

Still, time-off leave for cops has been canceled for four days starting tomorrow, in anticipation of post-verdict riots. Bell was unarmed when he was fatally shot by undercover police officers on November 25, 2006 (the police officers also injured two of his friends). It was just a few hours before his wedding. Police claimed they thought Bell and his friends were armed and were going to confront another patron of a Queens strip club.

The NY Times reports on the club, the Kalua Lounge, which is still operating in spite of having its liquor license yanked (the Times calls it a "juice bar with strippers"). The co-owner said, "We have our clientele still coming. I guess the alcoholic ones are going to stop coming.”

Bell's parents spoke to the Daily News. They felt Detective Michael Oliver, who fired 31 of the 50 shots, would "come in[to the courtroom] with arrogance, like he just didn't care. Like, 'So what, I killed somebody, it don't mean nothing.' Like it's a joke," believe the defense attorneys disgraced their son's memory and cannot bear an acquittal. William Bell said, "I cannot just see them going free like that, they can sit home and laugh and talk with their family. I don't think it's fair to us, at all."

Manslaughter 1 is a B felony punishable by up to 25 years in prison.

Manslaughter 2 is a C felony punishable by up to 15 years in prison.

Assault 1 is a B felony punishable by up to 25 years in prison.

Reckless Endangerment in the first degree is a Class D felony punishable by up to 7 years in prison.

Reckless Endangerment in the second degree is a Class A misdemeanor punishable by up to 1 year in jail.

#queens
#sean bell
#sean bell shooting
#trial
#verdict
Do you know the scoop? Comment below or Send us a Tip